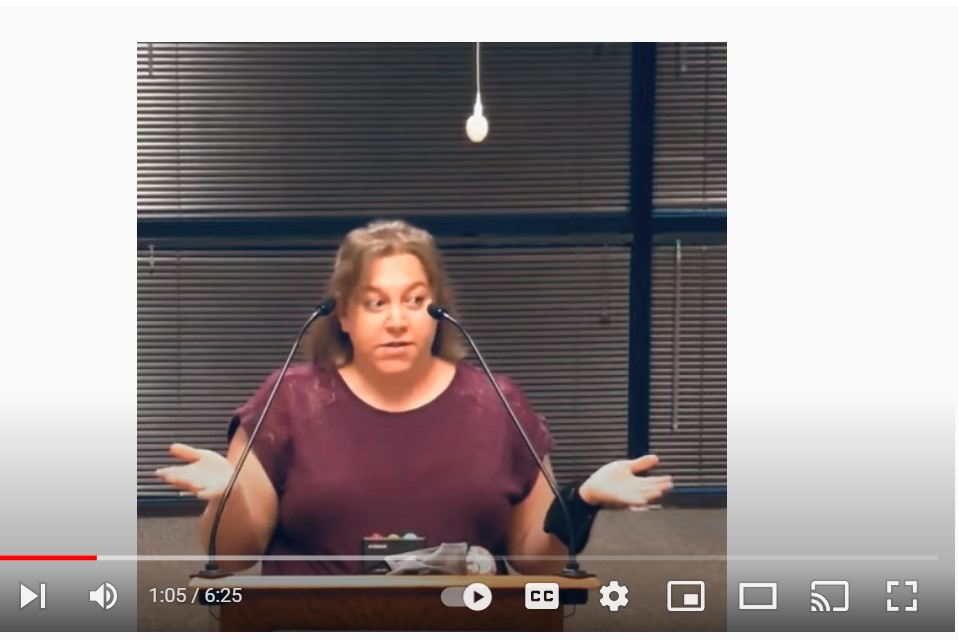 One of the purposes of the leftist media is to gaslight Americans or make people doubt their own instincts about political stories. Gaslighting relies upon tactics of shame and humiliation, which are clearly used in the left-leaning Politico report on the “politicization” of School Boards at the hands of Conservatives. But have they spoken to any real parents to find out why they appear to be so political now?

They definitely didn’t talk to this Mom, Amanda Horlebein:

“This is the last time I was allowed to speak at a school board meeting.  It might be because I told them they had no right to choose the care of my child’s health. I asked them if they applied sunscreen on the kids when they go outside because they don’t,” Horlebein told me. “They are not talking about learning at all.”

As if Conservatives have MADE school board races partisan all of a sudden. Such a thing could only be hinted at by a person who hasn’t spent time listening to real American parents about their attempts to sway their local school boards to adopt different policies on face masking, COVID testing, school surveys, sexually graphic novels, gender change, and other social issues that public schools have become known for promoting.

Especially one school board in Wake County North Carolina. Consider this exchange between Horlebein, a frustrated and exhausted parent:

If you think that it’s a secret you collude with 15% of teachers(NCAE) and this group (attached) then you truly do not live in reality.

We will not forget.
You are the most arrogant, closed-minded, willfully ignorant, condescending group I know.

I used to think: they cannot possibly be enjoying this bi-monthly event…. Until King Sutton left.
I heard a lot about how you all got to know each other and how many tears there would be. I heard nothing about the children.

If you think that ignoring this will make it go away.
We will never ever give up. Ever.

Some slogans to ponder for the upcoming election. (There are several strongly considering running (in each district)-it is only a matter of who should run at this point). We will not let the public forget your middle of the fence, collusion with NCAE, anti-child, failing rates, increased school violence, increased SI (for Jim: this is a medical abbreviation that stands for Suicidal Ideation), and so on…

Karen Carter:
Cart her out, vote for (insert name here)___

Monika:
There is no need for a slogan here as your passing rates are so abysmal. Anyone will win.

Lindsey:
This district is laughing, vote out Mahaffey.

I will continue to be a thorn in the side of the BOE until at MINIMUM both sides and opinion are represented. *in a non-domestic terrorist way of course.  No violence is needed. Only votes.

These are OUR kids. Nothing has changed since 9/7- it’s not your job to protect my child. (Note- I was told the school cannot put soap on cut-only water and a bandaid. #nologic)
It’s my job. Period. Your job is schooling. That’s it. It’s not a hard concept.

We will not forget our rights continue to be violated.
We are only counting down the days until we flip all 9 seats.

“If I didn’t need the socialization component of public schools, I would take my kids out.  I am so frustrated over what the schools are doing that I lose sleep over it,” Horlebein, a Wake County North Carolina Mom of two children under 10, told me.

Horlebein reflects the sentiment of most of the parents I interview.  And being political was the last thing on their mind this year, but it has happened to many of them.

“I got involved in this political mess last Spring when the Principal of my child’s school told me that the school board was going to vote on whether or not children had to wear facemasks on the playground, and so I went to that school board meeting and had my eyes opened.  Now I see that I have to be political, and never let my guard down again.  I know other Moms who were Democrats, and they know now they have to make changes too. I never used to even watch the news, and now I do daily because I have got to figure out what is going on.  It is not that I want to be political, but I am because I have no choice,” Horlebein told me.

In fact, Horlebein is so political that she is taking a very firm stand with the Wake County School Board and also speaking at Wake County commissioner’s meetings as well.

The School Board leans very far to the left, embracing every radical far-left policy of Democrat Roy Cooper. Cooper has the schools tied in knots over draconian tests and mask requirements.

Wake County is also a Panorama School District which brings in other issues- for many parents- with Social Emotional Learning surveys and sexually graphic novels.  Further, the school district has also been the home of a highly invasive equity department that pushes radical left agenda of indoctranation- in other words, Wake County North Carolina is a hotbed of leftist usurpation.

Horlebein told me that the school board is made up of 7 liberals, one independent who was elected as a Republican and changed, and 1 Republican.

And the exchanges between Horlebein and Republican Karen Carter are terse to be fair. With Carter responding to Horlebein’s email above with:

Horlebein, a pleasant and friendly person- who really only wanted to stay home and raise her children, has found the need to be assertive and even unfriendly with Carter, who Horlebein acknowledges is in a difficult position on such a liberal board as Wake County.

For months I have covered a small group of concerned parents who have attended School Board meetings watching them plead with the school board members to allow their children to be unmasked.

The 7 liberal members will insist that they must mask everyone all of the time, including the moment children, come off the playing field and onto the sidelines after playing a sport. But parents like Horlebein don’t care what Roy Cooper and the Democrats want.  She wants her child to be mask-free. She wants Carter to vote against all of them.

Carter is in a difficult situation.  She is not being allowed to represent the people who elected her and who continue to plead with her to stand up.

At issue is whether or not the board will vote to support Roy Cooper’s CDC-based mandates. Cooper is one of the most far-left and radical proponents of COVID measures in the country- in a red state.

“The School Board has chosen to go along.  Not all districts in North Carolina are going along with Cooper.  We need to get rid of him.  Schools could not go along with him and let the chips fall where they fall.  The board could acknowledge that it is my parenting choice on how I protect my children. They are there to educate. But they are being political.  Carter is going along with them,” Horlebein told me.

Even I have witnessed a radical left male school board member bully and intimidate Carter about her consideration of the district’s concerned parents until she relented and voted along with the majority to continue to mask children over concerns that Roy Cooper has made it uncomfortable to not mask children.

School boards are highly political already. In fact, they are little micro-worlds of power and control, and money that reflect the power struggles all over the country, where the left has had their dominance for decades and the people, like the Wake Co North Carolina parents I have interviewed this year, are finally miserable enough to come out of the shadows and say ‘no more’.

The establishment has no one to blame but themselves for creating the “momma bear politico’. Allowing the left to have control over taxpayer-funded institutions was eventually going to find a balance.  2022 elections is the day that happens.