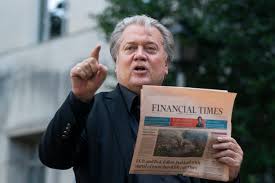 Jason Miller, the CEO of GETTR posted the following statement from Steve Bannon, host of the War Room program, about the newest steps to harass him into silence ahead of the 2022 mid-terms:

“Important new statement from @SteveBannon – please repost this and make sure we get the truth out! #MAGA,” Miller posted.

Along with the following statement by Bannon.

Steve Bannon, former adviser to former President Donald Trump, is expected to surrender to prosecutors in New York on Thursday, sources familiar with the matter confirmed to ABC News.

The details of the charges are unclear; however, the sources confirmed to ABC News that the charges brought by the Manhattan District Attorney’s office stem from the federal prosecution of Bannon over “We Build the Wall,” an online fundraising campaign for a wall along the U.S.-Mexico border.

In the federal case, Bannon was accused of defrauding donors and using the money for personal expenses.

Trump pardoned Bannon on his final day in office but two codefendants who did not receive pardons pleaded guilty.

The pardon only applies to the federal case and does not preclude the state charges, the specifics of which were not immediately clear.

The Manhattan District Attorney’s Office had no comment when reached by ABC News.