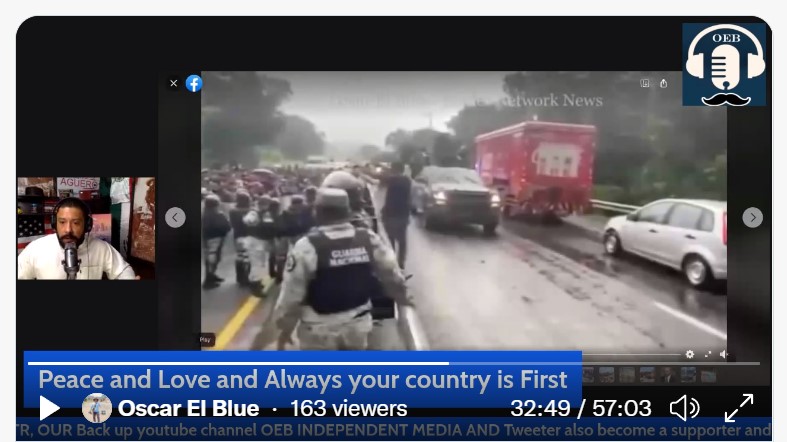 Oscar El Blue is a reporter in Mexico who has given the United States many warnings about the coming invasion that has come through his home country, from numerous third world countries, causing havoc for Mexico as they make their way to the United States significantly impacting two countries.

“This man who is organizing these caravans is a dual citizen, he is an American citizen who is leading these migrants who are asking for liberation. He knows what he is doing,” El Blue. “This is not being called a migration it is being called an exodus now,” he said, which explains why Democrat Joe Biden welcoming them to the United States claiming humanitarian reasons makes sense.

“All of the commissions of refugees  from around the the United States that there are a total of around 400,000 who may be coming at staggered times, we know from our reporters that these people are claiming to want to go to the United States, and that is where that number comes from.  So around 25,000 near Columbia now, so these numbers are spread out.  We have 2,5000 now.  Is Mexico prepared for these numbers?  That is why Mexico has a shelter and is getting ready to take on these numbers.  We have the footage of what the process is, so these people can get through America,” El Blue said in his broadcast.

In the following video El Blue for his media group, Border Network News, expose a large caravan of close to three thousand illegal immigrants headed for the United States and the process they have to get through to make it to the United States where Democrat Joe Biden has laid out a welcome carpet for all of the people of the world to get free amnesty.

El Blue reported on what he explained was a group of migrants who wanted to make their way to America through Mexico and were protesting with a Community organizer, who was putting pressure on judges to let the migrants get to their destination.

In a longer broadcast, El Blue shows how the town where the protests have been ongoing has been decimated by the migration process and the leftist influence on the law enforcement in the area.  Along with the migration from the third world through Mexico are massive humanitarian crimes that are committed by the hand of the very activists who claim to be defenders of humanitarian issues.

Child and human trafficking is out of control, along with drug smuggling over the southern border and in to the United States of America.

This video shows the devastation and El Blue names the activists who are responsible. According to El Blue there could be close to 500,000 migrants headed toward America through Mexico.

The border crisis with massive caravans and hoards of people around the world wanting to come to the United States of America, and with the open borders at the direction of Joe Biden, is not a well-discussed topic because the media has been forced to not cover the current events on the border.

In general, most people accept that the purpose for encouraging the massive migration is to shift voting power for the Democrats after taking such a massive blow in the last two elections.

The immigration process in America appears to have been purposefully destroyed in favor of chaos, as border enforcement is getting orders to help migrants cross into both Mexico and the United States.

El Blue cites the Globalist compact, which I talked to El Blue about,  as the reason for the upheaval around the globe.

Which along with the recent reporting by Ben Bergquam that border security is being told to focus on humanitarian needs, should make everyone sit up and take notice.