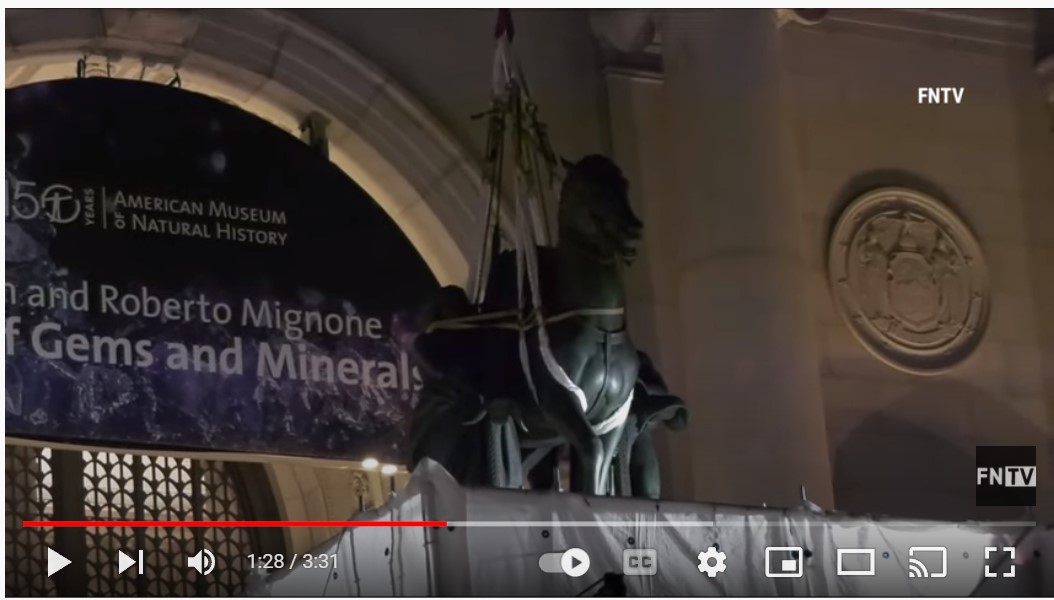 Under a cloak of leftist evening darkness, an iconic statue to an American Republican President, known as “Bull Moose” has been removed by the City of New York assisted by their left-leaning “art” agency, who want to use public space for more favorable art- to their political and Anti-American agenda.

“Do what you can, with what you have, where you are.”
― Theodore Roosevelt

Roosevelt was an iconic President known for his determination and his leadership with The Rough Riders, a nickname for the the 1st United States Volunteer Cavalry, one of three such regiments raised in 1898 for the Spanish–American War and the only one to see combat.

“The statue of Teddy Roosevelt has been removed from the Natural History Museum in New York City. Left-wing activists said the statue was racist,” reporter Andy NGO reported on Thursday.

“January 20, 2022 Manhattan, New York – Teddy Roosevelt Statue continues to be quietly removed in the middle of the night from outside of the American Museum of Natural History,” Freedom News reported on Thursday.

The “Equestrian Statue of Theodore Roosevelt,” commissioned in 1925 and unveiled to the public in 1940, depicts Roosevelt on a horse, with a Native American man and an African man on foot at his side. It has been criticized by some as a symbol of colonialism and racism,” Reuters reported.

The bronze statue was covered by an orange curtain and was at least partially removed the previous night. Additional removal of the statue continued into early Thursday morning.

The plans to disassemble the statue in sections was carried out by the museum and planned since last June, when the The New York City Public Design Commission voted on its relocation.

There was no statement from the Design group.

Reuters reported on the statue removal, including a statement from the museum:

The New York City Public Design Commission voted last June to remove it, the museum said on its website. Its new destination will be the Theodore Roosevelt Presidential Library in Medora, North Dakota, the New York Times reported.

The museum on its website said it was proud of its long association with the Roosevelt family, adding: “At the same time, the statue itself communicates a racial hierarchy the Museum and members of the public have long found disturbing.”

Roosevelt, who was president from 1901 to 1909, was known for his exuberant and daring manner. He implemented antitrust and conservationist reforms, though critics said he took an interventionist approach to foreign policy, including projecting U.S. naval power around the world.