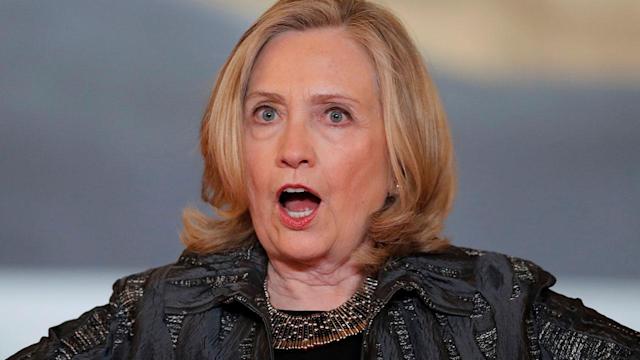 President Donald J. Trump released three statements from his “office of 45” on Sunday that pointed to massive scandal in the Democrat ranks, led by former US Secretary of State, former New York Senator, Former First Lady, and failed Presidential candidate- Democrat Hillary R. Clinton-  and Clinton spent the weekend smarting off and gaslighting Americans and trying to make a joke about her corrupt and deceitful actions against the American people.

“But her emails” Clinton posted, about “Galentines day” trying to make a jab at Trump- and her timing is insane, because just hours after posting that childishness on Twitter, Hillary was exposed by Special Counsel for the Department of Justice- John Durham- as illegally spying on the United States President.

Guess Clinton didn’t get advanced notice of the memo.

By Sunday morning, the news was viral. Finally, most people understood the epic scandal that had unfolded with the release of a report by John Durham that exposed the details of the spying scandal upon President Donald J. Trump by Hillary Clinton and the following storm of vicious lies associated of Clinton spread about Trump to discredit him and his supporters.

One reporter has been covering the story for years. Maria Bartiromo.

“I hope President Trump sues them all for everything because they damaged his reputation.  They were spying on the President of the United States.  What does it tells us about our National Security?  This is the biggest scandal we have ever seen!  They tried to cheat in 2016 and 2020. All weekend the White House leakers are talking about Putin again.  Is that because we have this Durham information and a 40 year inflation high?” Bartiromo said on Fox News, Sunday. ” I was right all along about Hillary Clinton’s crimes…”

And her appearance today did not go unnoticed by Trump; he released a statement about her show from the office of 45 on Sunday afternoon.

Trump reported on the news of the day, Sunday from his platform:

“What Hillary Clinton and the Radical Left Democrats did with respect to spying on a President of the United States, even while in office, is a far bigger crime than Watergate. It will be interesting to see how it was covered by the media and what Mitch McConnell and the RINOs will be doing about it. This is an insult to the Republican Party, but a far greater insult to our Nation. Covered very powerfully this morning by Fox and Friends and, of course, Maria Bartiromo.”

Trump suggested a great headline in a second release on Sunday:

“THEY SPIED ON THE PRESIDENT OF THE UNITED STATES!”

Then Trump smashed the fake news in a third release on Sunday:

“Could somebody please inform the low-rated political shows that plague our Sunday morning programming that my Endorsement of candidates is much stronger today than it was even prior to the 2020 Election Scam. I am almost unblemished in the victory count, and it is considered by the real pollsters to be the strongest endorsement in U.S. political history. There are plenty of existing politicians who wouldn’t be in power now were it not for my Endorsement (like the Old Crow!). The Fake News does everything within their power to diminish and belittle but the people know, and the politicians seeking the Endorsement really know!”

Bartiromo appeared on Fox News to remind people that she had been vidicated.

Here Maria spoke with Pete Hegswity about what she has been telling America for years- that Hillary Clinton is guilty of creating a false narrative to frame Trump.

And Bartiromo was already setting a course to follow up from the weekend’s news to make sure that there were consequences to the crimes committed against Trump, his family, his associates, and his supporters.

“Mike Turner, the top Republican on House Intel who could be the next chairman, says “absolutely” to Fox’s Maria Bartiromo after she asks if he’d hold hearings on the John Durham inquiry,” Daniel Chaitin wrote.

“He also says: “I think that this is going to lead in the end to Brennan, Clapper, and Comey.”