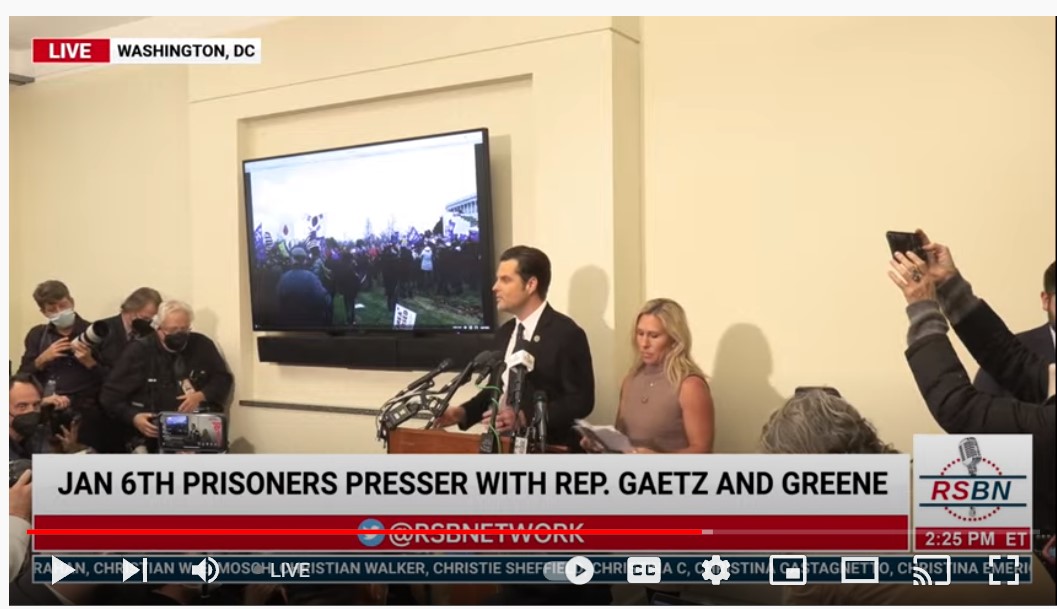 Two Republican US House Reps, Majorie Taylor Greene from Georgia and Matt Gaetz from Florida, took a tour of the grounds of the US Capitol, where they spoke with members of the media and then held a press conference to discuss their questions about the events of January 6th, 2020.

“We want to talk about Americans who are being smeared as violent members of a movement of supporters of President Trump’s, and they are trapped in messaging about what happened on Jan. 6th, 2020. That is concerning.  We want to know why the Government is investigating the American people instead of the actions of the Federal Government and law enforcement who may have incited the events at the Capitol, ” Matt Gaetz said on Thursday about the massive investigation into Jan. 6th.

“And when we take the House that is what we are going to do, we want Republicans to take over that Jan.6th Committee and investigate these concerns of ours,” Gaetz said in a push for people to get out and vote for America First candidates.

“Americans do not deserve what has happened to them today when Joe Biden referred to the attacks on the Capitol in that way- it was like a booby trap, to me- the way he and the media are hounding after citizens, and ignoring what Citizen Journalists and small media outlets have reported on seeing- from the crowd- that we find questionable,” Majorie Taylor Greene said.

Taylor and Greene referred to what they found very questionable was the thorough and well-organized preparations they had made for Jan. 6th 2020, along with Republican Jim Jordon (R-OH) to present oversight and review of the election.

Their combined efforts were completely cut off due to the violence that broke out and never revised.

“I am furious about the National Guard not being allowed at the Capitol.  They left the Capitol Police alone in an unsafe condition, and President Trump had called on them.  I want to know why they were not sent.  What happened there? Why doesn’t the Jan 6th Commission ask that?” Greene asked.

“They knew there was going to be violence, remember. They did nothing at all to stop it. Nancy Pelosi did nothing, so how afraid were they really? We need to know about what the FBI did to incite the people and direct the people? The American people should be terrified about the answer to that,” Green said.

At the press conference, Gatez showed two pieces of video footage of the Capitol grounds, one that showed a man known as Ray Epps, clearly direction people into the Capitol building and another man, whose identity is unknown, shouting down from a tall scaffolding on the US Capitol grounds to go into the building.

The press however was not impressed and wanted to know more about how Gaetz and Green felt about Biden as President and whether or not they were being directed by Trump to ask the questions they asked.

They were unmoved at the idea of Republicans taking over the Jan. 6th Committee and unconcerned about the historic harassment aimed at the US citizenry.

“There is vast political targeting of people who supported President Trump and who are worried about election integrity,” Gaetz said.

The media, having their talking points, want someone to talk about Democracy.

The full press conference can be seen on Rightside Broadcasting: