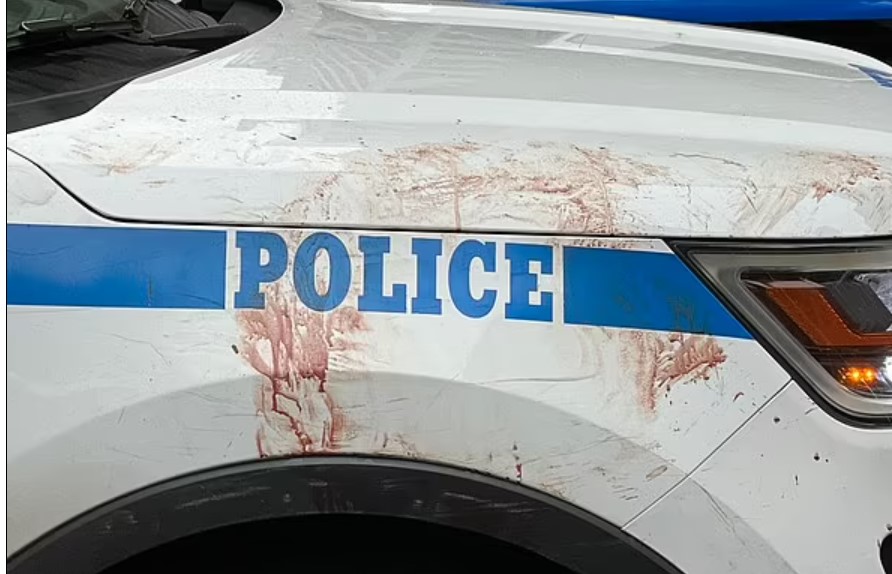 Multiple law enforcement officials said they are looking into whether the man who allegedly attacked the officers had previously posted what they called jihadist writings online and traveled to New York City to target police.

The suspect was identified as a 19 year old man from Maine:

The attack occurred around 10 p.m. on Manhattan’s 8th Avenue between 51st and 52nd streets, roughly one block outside the Times Square perimeter set up for the ball drop festivities.

Senior police officials said the preliminary investigation suggests a man swung a large knife, possibly a machete, at two officers on the busy street. They were both struck with the weapon but not seriously injured.

New York Post reported details about the men who were stabbed.

At least one officer fired upon the suspect, who sources said is originally from Wells, Maine, striking him in the shoulder. The sources said his injuries are also non-life-threatening. Investigators said preliminary review shows the man has no previous arrests but he was known to federal and local law enforcement because of what previous online postings, the sources added.

The man appears to be a lone actor in the plot, but officials stressed the investigation was still in its preliminary stages.

The knife attack and gunfire startled a long line of crowds waiting to join the NYE celebrations. A local pizza shop employee said panicked revelers fled amid the chaos.

Video from the scene shows revelers being hurried from the scene by cops attempting to control the scene, located at 52nd street and 8th avenue. Officers can be seen screaming at pedestrians to move away from the crime scene.

A police source told the Post, ‘No backpacks or umbrellas in Time Square. They forgot to mention machetes.’

While a witness told the NBC, ‘They moved the barricades really fast. He was a police officer in front of the barricade area and he moved it for police cars to move fast — and that’s when the barricade fell and got hit by the car. He got double whammied.’

The Post report also mentions the crowd in the area becoming rowdy and attempting to tear down barricades around an hour before the shooting.

Around 8:45 pm, another man was injured in a stabbing at Bryant Park on 42nd street following a knife. That victim is also in stable condition in Bellevue.

This incident occurred just blocks away from where a man was stabbed eight times. The suspect in that attack remains at large.

A spokesperson for the NYPD described the homeless victim, 41, as being ‘uncooperative’ after he was stabbed around eight times on the street close to west 40th street and 7th avenue around 11 am.

According to the police, the victim is being treated at Bellevue Hospital and is in serious but stable condition.

Pictures from the scene show blood smeared on a police car and on the street outside of a pizza parlor close to the Times Square train station.