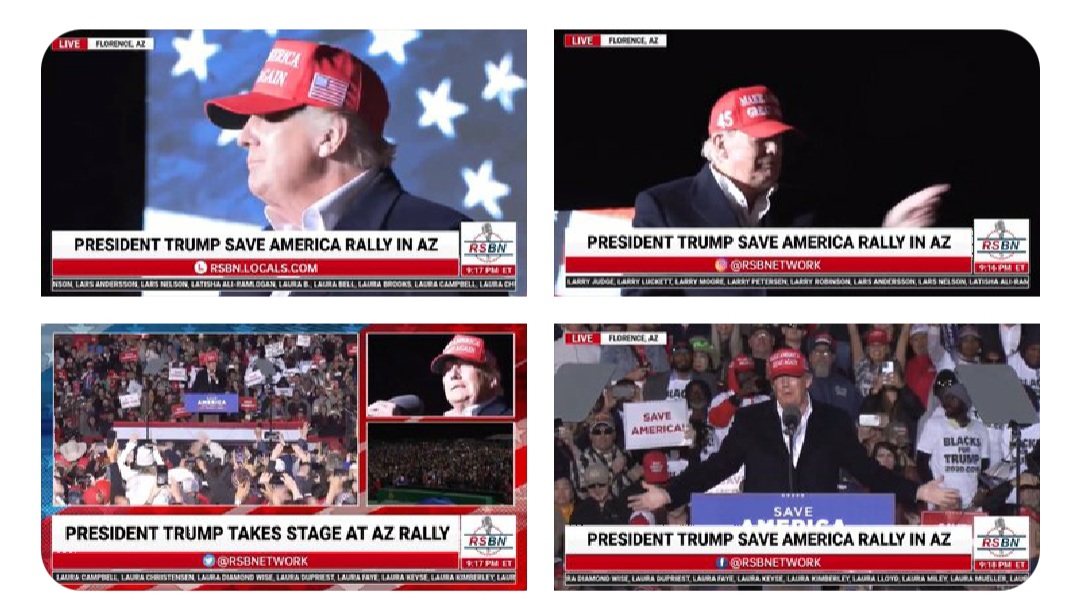 In a state that he supposedly lost by 10,000 votes, President Donald John Trump spoke to a massive audience that was estimated to be 50 thousand people. The event had a viewing audience of at least half a Million online viewers, in what sounded a lot like a campaign speech.

Trump entered to God Bless the USA and tossed out his signature red MAGA hats at 7 PM local time.

America First candidates made appearances, in a preshow to tens of thosaunds of online viewers- on Saturday night in Florance, Arizona, as the first Trump rally event of 2022, and speakers reminded people to vote in the state’s primary on August 2.

Candidate for Governor, Kari Lake a former journalist, who has secured Trump’s endorsement- was a crowd favorite.

The night was cold with light rain at times, and massive crowds stayed to hear Trump,  many of whom were not even able to see the stage, according to Right Side Broadcasting Network broadcasters.

"This crowd is a massive symbol of what took place because the people are hungry for the truth: They want their country back," Trump told his Save America rally in Florence, Arizona.#WeMakeAmericaGreatAgain pic.twitter.com/sVfStboiGp

Sherriff Mark Lamb gave a *Thumbs up* when asked by Trump if there were really long lines of cars waiting to get into the arena.

Trump associate, Dan Scavino, posted video on line of some of the lines of cars who were making their way to the rally.

Enthusiasm to hear Trump was huge.

In the Speech, Trump gave a hopeful hint that he would be returning as a candidate in 2024 and that he would be staying active with candidates before that, helping shape a total takeover for Republicans to secure a long list of policy agendas to save the United States of America.

Trump slammed Democrats as practicing “mean, vicious, left-wing facism” and said that it was not China, Iran, or North Korea that was the most difficult country to deal with as President- but that it was the United States of America, that was the worst because of the left and how they are trying to destroy the country.

This may have been Trump’s best rally to date. Cath as much of it as you can.