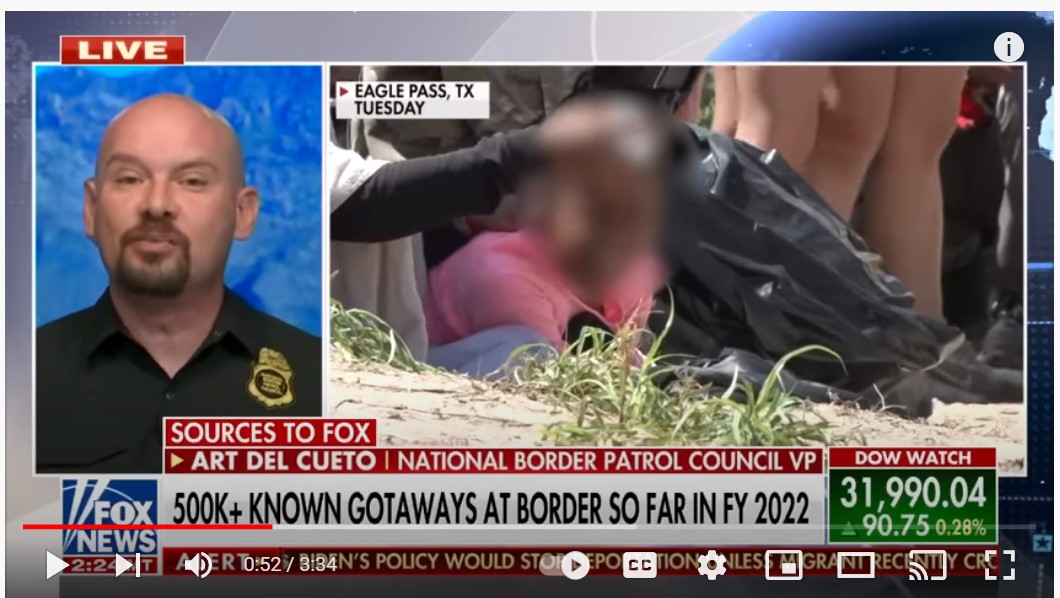 Fox News recently interviewed National Border Patrol Council Vice President. Art Del Cueto, on ‘Your World’ to discuss the more than half a million known ‘got aways’ at the U.S. border who have not been caught.

Del Cueto makes an excellent point about the people; the got aways- who are hiding away. He says that since after the process is so easy to come in and be transported around the country- we really should worry about the people who go the extra mile to be undetected. Why are they hiding?

The New York Post defined Got Away in their recent report on the topic:

“Gotaways” is a commonly used term for illegal immigrants who have been spotted crossing the border by agents or on camera but were not caught or processed by officials.

With less than three months left in the fiscal year, 2022 has already seen a massive increase in the “gotaway” from the previous year after DHS Secretary Alejandro Mayorkas testified in April that there had been more than 389,000 immigrants who evaded arrest in FY 2021.

Looking at the two years combined, the department has tracked approximately 900,000 known “gotaways,” according to the report.

Tucson has had a major problem with Got Sways

FOX: “This is much worse than we thought it was. It’s stunning.”

DEL CUETO: I’m glad it’s coming out and people were talking about it. Look, the National Border Patrol Council has been screaming about the ‘got aways’ for a year and a half now. Down in the Tucson sector, they continuously have led the entire country when it comes to Got Aways. And the reason it’s happening is that you have agents that are being moved from one area to another to another area- pretty much to ‘process faster’. That’s what happens. You know, you have this incentive to come into the United States knowing you’re going to be caught and released in the country who has to take care of that?

Agents have to the processing, the hospital watches. They have to do all of this many times- they have to do to transport. So now it leaves other gaps in other areas of the border and what’s been happening continuously is you’re moving agents from one sector to another sector to help the process.

So now you’re leaving even more gaps in sectors that have for a long time been notorious for the got away. You know, you’ve heard the number, that’s a stunning number, but at the same time, the reality is, that is just a guesstimate, because the number is more, likely, much higher because of individuals that come in, that are not protected. And there’s no way to really now.

FOX NEWS: When the Biden administration says that the Border is secure and obviously they’re aware of the numbers, something Isn’t jiving.

DEL CUETO: Well, they’re just not paying attention, they don’t care to pay attention. And at the same time, when you have your audience built, there’s a group of individuals in this country that are going to believe, no matter what they’re told, no matter if the numbers are just oh, that’s not true. This is that, you know, so and so’s telling me this is what it is, and that’s part of the problem. So they’ll continue feeding that audience. The lies they want to feed them, but people need to realize it is a big deal. And, you know, it’s something that’s going to affect us for many years to come. You don’t know where these people are going, where they end up or who they are.

You don’t know where they’re coming from, or their intentions. And when you see that it’s easy to enter the country right now, turn yourself over and get released, right? It is the catch and release process. You’ve got to sit there and wonder if it’s that easy to get caught and released; how bad and how horrific can the criminal background be on those individuals that go that extra step to not be detected? And that’s where the reality has to sink in.

FOX NEWS: If I’m looking to sort of break into the United States, I like my odds.

I mean, a definite, if you know that the gaps are open and at the same time, those odds are opened up because the current Administration has released that incentive or hey, come in, get caught, get released and who’s watching the border? The cartels, the human traffickers, the sex traffickers, and see when agents are removed from one area to the other, and that is when it is the time to take advantage of us and bring across these individuals into the United States, knowing fully well that they’re not going to get apprehended.