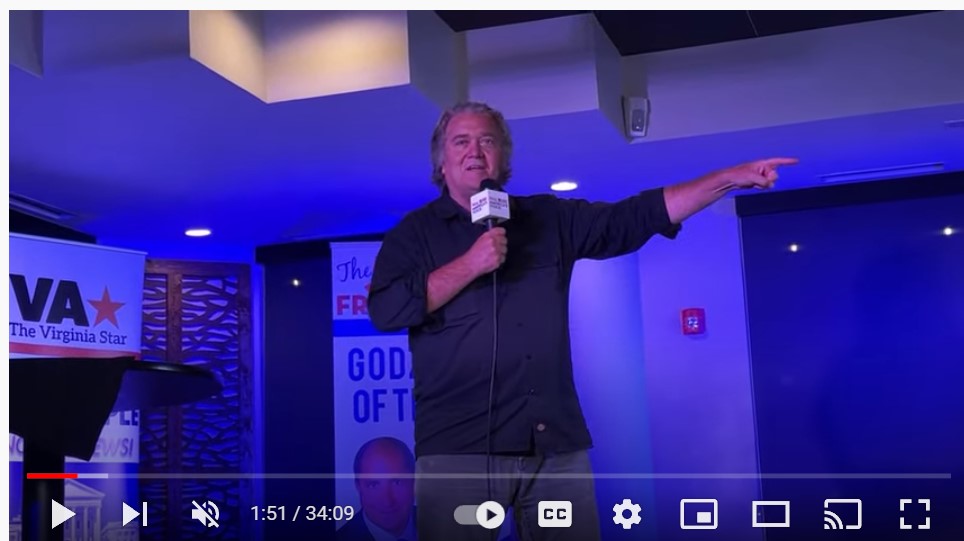 Steve Bannon is a longtime political icon who pours out his wisdom, energy, and experience into the American public’s consciousness daily. He has had tremendous victory, inspiring people to get on and stay on their feet doing powerful legislative action. Bannon is constantly playing smashmouth with the established order in Washington DC.

“They fear you, they fear the righteous indignation of the working men and women of America,” Bannon said to an enthusiastic crowd on Wednesday in ,Virginia, at a rally of War Room viewers.

“They are trying to activiley destory the greatest country on Earth, but we have them on the run,” Bannon said.

Many political watchers credit Bannon for organizing concerned Americans into the coalition of the MAGA movement that propelled President Donald J. Trump into action.  Bannon has kept that movement together through all odds, against all evidence that those people would stay engaged from politics after the shock of the 2018 midterms, and the 2020 election.

Now Bannon mentions the America First movement and people go wild, because it is about getting the average person to use their American citizenship to break the Marxist left, and some people love that, and some people hate that; Bannon drives everyone wild.

“It was Donald Trump who gave you a space in the room, and a seat at the table in 2016, and now he has been more engaged, becuase he does not consider himself as an ex-President,” Bannon said.

With talk like that, Bannon has made all of the difference in 2021 and 2022 politics. Already in 2021 news reports and polls show that the America First movement has, in fact, pushed the left to the sidelines.
“Now you have given yourself a seat at the table in 2021,” Bannon said about the “focused rage of the American people.”

Bannon has gathered up his Populist forces of activists, and aimed toward the same political establishment which he has spoken out against for decades.

Bannon reminds readers that he was personally rebuked by China, within moments of Democrat Joe Biden taking the oath of office, so with the Chinese Communist party breathing down Bannon’s neck, this time is really for all the marbles.

It is epic to watch Bannon himself, who comes from a working-class family, who is not a product of the establishment, who is simply the’ man in the arena’, fighting for the country he has loved for so long, and doing it very publically on the War Room podcast.

America has watched as Bannon has risen and fallen, and been hounded by the left unmercifully- persecuted by the courts and demonized on social media. Yet, there he is. Still fighting. That is the American spirit Bannon has and that he inspires in others.

This is a great victory speech- thanks to Ben Bergquam, the founder of Frontline America for filming it. Please watch and share and follow @BenBergquam on GETTR and Twitter for more frontline, front-row views of this great Populist movement that you are a part of- it is making history.