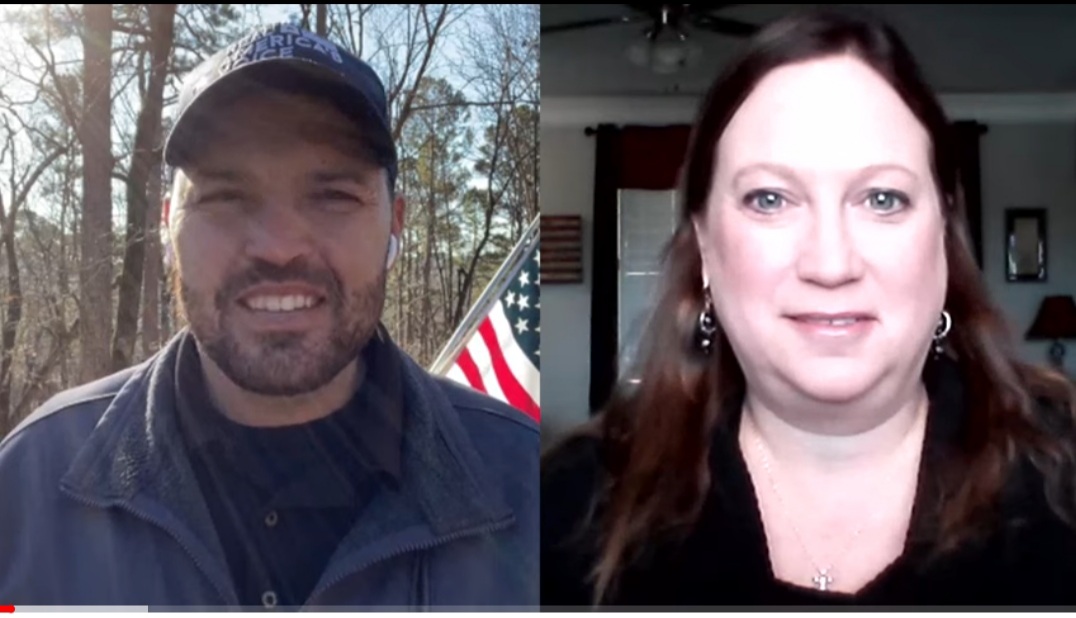 Real Americas Voice reporter and founder of Frontline America, Ben Bergquam, got a chance to talk to the director of the Wake County, North Carolina chapter of Moms For Liberty, Julie Page.

Wake County North Carolina school board has made national news numerous times for their leftist demands, including most recently when Paul Koh talked about grooming children for never-ending masking demands, a speech that went viral and appeared on Tucker Carlson’s show, Jessie Waters and Laura Ingraham- for being shocking.

We covered the story of the night Koh spoke as well because Page spoke at the same meeting, but about a different topic.

“Parents are being labeled as domestic terrorists around the country for this kind of activism,” Bergquam said, reminding everyone of the stakes that parents like Page face for their involvement in a growing and persistent parents movement.

“We have 9 seats on the School board, and so far we have at least 7 candidates who are going to run to change that board. We have access to at least 1,000 people who are aligned with us and we are growing, and plan to grow even more,” Julie Page told Bergquam about her goals for her group, reminding people she is not a professional activist, “I am just a Mom.”

“Right- for such a time as this, right? Without the pandemic we wouldn’t have gotten this information about what is being done to our children,” Bergquam said.

Page told Bergquam about how she went from “stay at home Mom” to Warrior activist, who has been instrumental in organizing that powerful parent’s movement in North Carolina.

Nevertheless, the leftist school board refuses to interact with Page or take the parent’s concerns into account.

Page started her journey in activism by simply attending and then speaking at the Wake County Public School Board Meetings, to leading a chapter of other parents- with similar concerns- to influence lawmakers and legislation.

Page is also an integral part of a group of parents, from other associations, who have built a public “panel of parents” to speak as an alternative to the School Board Meeting.

There the group hopes to grow a network with others and give parents an outlet. They also want to flip the school board who have battled them for close to a year.

Watch Page tell Bergquam what she is going to do about it.

For anyone who is interested in joining Page and her parents’ movement, here is some follow up information from Page:

What are the goals for the chapter?

Our mission is completely centered around parental rights. We believe that parents partner with publicly-funded schools, not co-parent with them. Parents have the God-given right to be involved in their children’s education, to know what is being taught to them, and to have a say in curriculum. We are especially interested in electing officials that support parent choice at all levels of government. We will hold leaders accountable, promote liberty, spread awareness, engage on key issues, and oppose government overreach. We believe masks, testing, and vaccines should be left to parents to decide – we are against mandates of any kind. We believe the United States Constitution tells us everything we need to know about our rights. We believe all people should be treated equally and our liberties should never be infringed upon.

Where are your meetings and how do people join your group?

Our meetings have been held at various locations in Raleigh because that is the central point in Wake County. Thanks to a very generous offer, our next meeting will be held on Wednesday, February 23, at 6:00pm at the Wake County Shrine Center, 6015 Lead Mine Road, in Raleigh. People may get more information about joining by emailing moms4libertywakenc@gmail.com.

What types of people can join Moms for Liberty?

Moms for Liberty of Wake County is a non-partisan, 501(c)(4) non-profit organization that is centered around parental rights. We welcome moms, dads, aunts, uncles, grandparents, and any like-minded citizen to join us in our efforts!