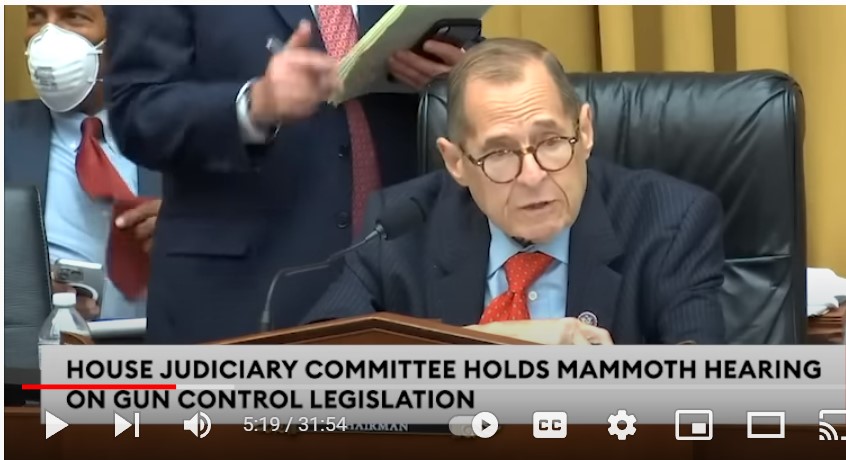 The following exchange is sure to awaken people if they have been sleeping for the past ten years- through the gun control debate between Republicans and Democrats.

Radical leftist Jerrold Nadler from New York explains his opposition to allowing Americans who work in pregnancy crisis centers- to have self-defense, saying that untraining people who were not in the military should not be allowed to own weapons- while ignoring the violent radical activism against the same people, whose workplace has been brazenly targeted by the left and viciously attacked.

“Attacks on crisis pregnancy centers by radical pro-abortion activists are heinous, yet Democrats remain silent. These organizations provide crucial resources and deserve our protection and support,” US Rep Dan Bishop, a member of the US House Judiciary Committee, wrote about the hearing last week.

In the following video, from Wednesday’s House Judiciary Committee hearing, Republican lawmakers promoted an amendment that would allow gun control exemptions for people at crisis pregnancy centers, and Democrats shot it down.

‘They Don’t Care If The American People Have To Suffer!’: GOP Reps Rip Democrats Over Public Safety.

Here was the discussion from US Rep Mike Johnson of LA:

“I offer a very common-sense Amendment and I don’t think anyone here should object to the amendment. It would simply include employees at Pregnancy Care Centers among those exempt from the restrictions in the bill. Now look, here’s the logic behind it, and I dare anybody to challenge me on this.

There have been more than 50 instances of attacks on pro-life organizations since the majority opinion
on the case was leaked in May, that’s just in the last 11 weeks, 50.

Let me give you a short list of some examples:
May 5th, 2022, in Portland, Oregon vandals smash numerous windows and spray painted graffiti on southeast Portland Pregnancy Resource Center.
May 13th activist left threatening messages on the front of the Alpha Pregnancy Center in Reisterstown, Maryland, including the messages that said- If abortions aren’t safe? Neither, are you your anti-choice? Not pro-life.

May 18, and was targeted a woman’s faith based Medical Clinic in Auburn. Alabama, the facing the clinics. Nine staff, members Vehicles May 25th Lynnwood Washington? The activists smash windows and vandalized The Next Step pregnancy center with the thread. If abortion isn’t safe, you aren’t either June 6, Asheville, North Carolina, vandals broke windows and left Graffiti On The Mountain area of the pregnancy center. Our services are building, including messages abortions, aren’t safe. Neither are, you know, forced abortion and an anarchist symbol.

June 7th ports. Indicate that an abortion terrorist group, change Revenge. This is from the public record of a Firebomb at the compass care, Pro-life Pregnancy Center in Hamburg, New York.

Rouge Louisiana by spray painting, anti-life messages in Jane’s revenge on its exterior wall that many pages of this. I’ll stop with that one because it’s personal to me the woman’s new life when it stands right next to the abortion provider in Baton Rouge, and the New Life Clinic is offered hope to countless women for years.

I’m proud to call many of the leaders of that clinic friends and they do not deserve the treatment they’ve endured but they certainly deserve the support the House of Representatives condemning violence from the radical left and the very least allowing them to protect themselves as they go to and from work.

There are over 2,700 care Pregnancy centers in the United States who served over two million women in need a year.

They’re supported by over 10,000 medical professionals and they do exceptional important work.

You all said we want the safety nets for pregnant women and those in need and they these these facilities provide a vital service.

I used to be legal counsel for a number of these. So I’m speaking from personal experience, here’s my point on this amendment. It’s very simple. He have any group deserves to be excluded from the provisions of this bill is those who are facing real threats to their lives as per for providing non-abortion Pregnancy service.

If women at the Department of Education and other Federal agency employees are excluded then these folks certainly deserve to be support , and I hope that you all will support this amendment.

Then Nadler responded and his response should make everyone sit up and take notice:

I recognized myself in opposition to the amendment. Certainly no one condone violence at abortion clinics and no one condones violence any place, but whole point of the bill is that possession of these types of weapons by untrained forces, by by forces that are not military forces or law, enforcement forces will increase violence. They will create a danger to people and to the agents around. So for that reason, I oppose the amendment bill is about the possession of- rather- the NEW possession of these types of assault weapons.

Exception for law enforcement agencies and other military site and for Agent beyond that design training increase people getting killed so I oppose the amendment.

Notice- nothing that Nalder said shows that there is any concern for the leftists who are assaulting the people who work at the Pregnancy centers.

And wait until the end- when Johnson exposes- that Nadler’s opposition is not about military training- it is about control.

They want us to be defenseless. There is no way to see anything otherwise.