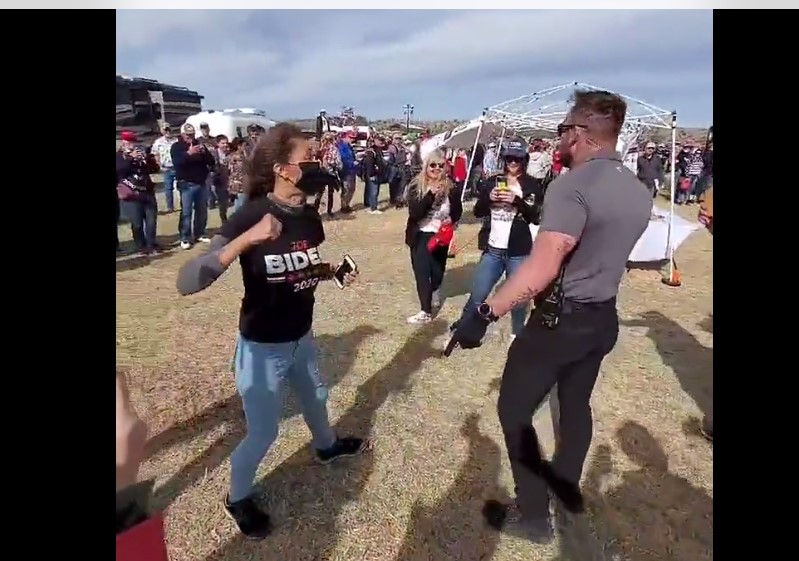 A Democrat activist, representing Democrat Joe Biden, infiltrated an Arizona rally in support of President Donald J. Trump on Sunday, agitating a group of attendees, making threats, and acting as if she was about to attack people.

It appears that the activist, who is a California resident, had changed her Twitter account for the AZ rally, perhaps hoping to make the news:

“Mara Pineda – looking for counsel. Arrested at the Trump AZ rally and detained for 23 hours,” read her Twitter account

Claiming that she was exercising her First Amendment rights, the woman was caught trying to start a fight.

Video emerged of the activist being arrested.

At one point in the video, the activist reels her arm back, making a fist as if she was getting ready to punch a security officer who would later lead her out of the crowd and out of the event.

The woman  was recognized by reporter Andy Ngo, who posted the footage of the woman and identified her as someone who he was aware of:

Leftist agitator Mara Pineda (in the Biden t-shirt) threatened violence at the Trump rally in Florence, Arizona, over the weekend. She was put in handcuffs by deputies after security called for backup.

Heard in the video is a male saying:

A woman is seen being aggressive toward a group of Trump supporters when a police officer approaches, which makes the activist back away a bit.

“That’s a threat! That’s a threat!  Stop making threats- lady!” The woman, wearing a “Biden” shirt, is seen trying to evade police officers. Seconds later, as the crowd of people she had been fighting was cheering, two men in Sherriff vests come and handcuff her and take her away from the location.  The woman, as trained by leftist community organizers, attempts to throw herself to the ground, making herself “dead weight” to harass the sheriffs- however, due to her petite frame, she was unable to shake them off. She was easily subdued, as the Sherriffs allowed her to fall to the ground while they continued handcuffing her.

A man who was videotaping the episode is heard saying “Lets Go Brandon”, and “get out of her Communist!”.

“We say no the radical left,” the man said, walking behind law enforcement who had handcuffed the woman and walked her out of the event. “We thank our law enforcement,” he said while the woman was flanked by four men.

Leftist agitator Mara Pineda (in the Biden t-shirt) threatened violence at the Trump rally in Florence, Arizona over the weekend. She was put in handcuffs by deputies after security called for backup. pic.twitter.com/POqKv6M0Lx

Pineda posted after she was released, still trying to agitate people  and was interested in defending Democrat Joe Biden.

Pineda also claimed that Trump’s rallies- which she knows are free and open to the public, was a “money grab” for President Trump. Pineda made numerous allegations that she is getting ready to declare there was some sort of abuse in her, in a number of her responses.

“23 hours in the pokey for…. trespassing (I had a ticket).” Pineda posted.