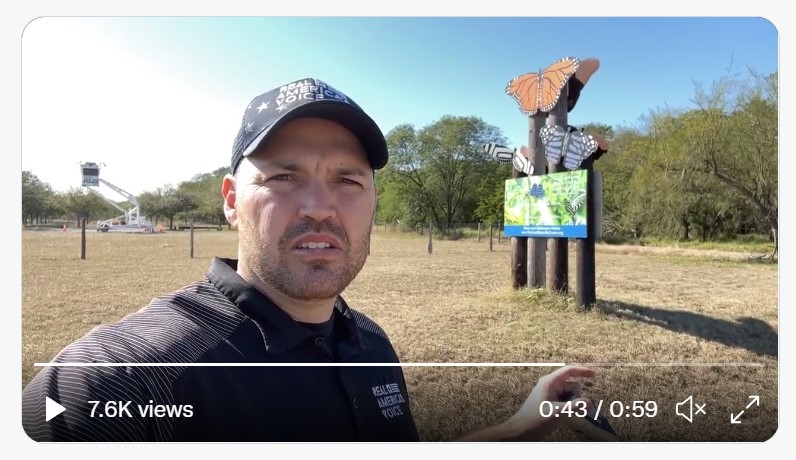 Ben Bergquam has numerous contacts in both the United States and Mexico who network with him so he can bring the American people detailed interviews about how the Democrats are causing a massive increase in crimes, for both countries, using many different tactics and schemes. Here he investigates reporting about illegal invaders coming thru property that is being used to protect Butterflies.

“As others have mentioned, we’ve NEVER had to close due to immigrants or “cartel” making threats or menacing us, but we’ve had to close b/c of MAGA militia, their malicious & defamatory smear campaigns & now their mid-term kick-off “Take Action Tour,” The National Butterfly Center Spokesperson reported.

Over the weekend- the National Butterfly Center reported they had to close down, out of fear for their lives that something was going to happen to them. Of course, they meant supporters of President Donald J. Trump were going to be in the area- and Bergquam took the opportunity of covering a rally in the area, to unify with the group and call for the border to be closed down.

“If that is what takes to protect the children being trafficked in these areas, we unify with the Butterfly center to close down the border over the threats,” he said in a video.

Let’s examine how serious the National Butterfly Center is about their fears, keeping in minds these are determined, Democrats and anti-Trump activists.

A TYPICAL TACTIC BY THE LEFT

Key Point: This is the public policy being used in this story to protect an illegal invasion at the Southern Border. “EPA is committed to protecting pollinators, including the monarch butterfly.”

One of the schemes the Democrats have in the Southern Border- is to exploit the Environmental Protection Agency (EPA) to coyly “protect the butterflies” , in an area of the border that is being used- allegedly- as open and unfettered access to gain entry into the United States, bypassing our legal immigration system.

And Bergquam, in a recent report, exposed it all.

Watch this report- and the following interview, with Border Patrol, that supports Bergquam’s findings.