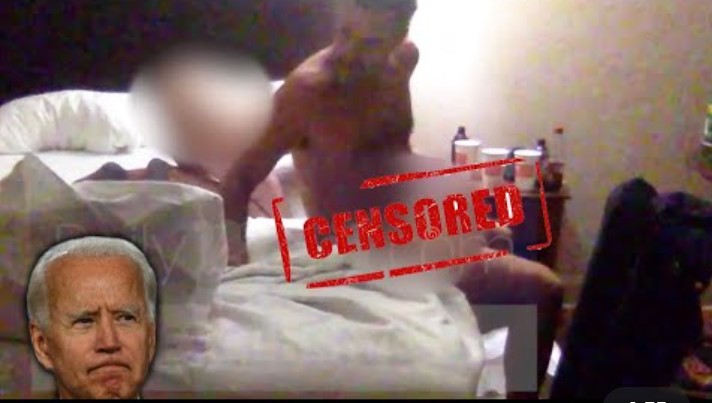 Video has emerged that shows someone who sounds like Hunter Biden walking around an apartment room, asking a woman who seems to be disinterested in him, about how she feels. The man is asking the woman repeatedly if she is ok, and he says something about how it took him so long to give her $10,000 dollars.

That matches up with a story that is found in Blaze, this week:

The so-called “laptop from hell” has revealed yet again that some of Hunter Biden’s expensive, hedonistic pursuits were funded by President Joe Biden.

According to data uncovered in the laptop, Hunter Biden received tens of thousands of dollars from his father in a very short amount of time. Andrew Kerr and Jerry Dunleavy report for the Washington Examiner that Joe Biden wired son Hunter “a total of $100,000 to help pay [Hunter] bills from December 2018 through January 2019.” Though Hunter sought the money under legitimate pretenses, he often spent much of it on Russian escorts, records show.

Here is the Washington Examiner story:

And that reminds me of a story I wrote- where US Rep Devin Nunes says that there are stories about Russian Prostitutes- but that it is not about the fake news story about President Trump, as pushed by Trump’s opponents and the lapdog media- but rather about Hunter Biden:

Democrats and their media allies, who cover up information the American people need to hear, have assisted in a clear cut case of helping the Biden Family project their criminal acts unto other people, and the entire Russian Hoax meant to frame President Donald J. Trump and his administration and associates may have actually happened, with the Biden family and their administration and associates, according to Rep. Devin Nunes.

“It ends up that the story that ended up in the Clinton Dossier that the fed to the FBI was true except it was a fantasy-based off of the Biden Family. So there are prostitutes there is Moscow money, I don’t know if there are Pee Tapes or not but it involves the Bidens and they have a whole of explaining to do before the American people before they go to vote in this next election, ” Nunes said Sunday on Sunday Morning Futures with Maria Bartiromo.

“Adam Schiff is telling the press that it is all Russian disinformation, Bartiromo said. “And you would say?” she asked Nunes.

A little background first: Remember the story about Trump as a candidate visiting Russia and staying at the Ritz Carlton, renting the “Presidential Suite”, hiring prostitutes and paying them to urinate on him, in a bed stayed on by former President Barack Obama is a massive conspiracy by the left, and a powerful one that is the basis for the “Resistance movement” for hundreds of thousands of posts and stories claiming that Trump is connected to Russia, and also the basis for legal action against Trump by way of FISA warrants to spy on him and his associates and administration.