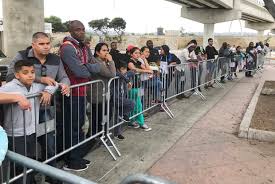 Republicans representing North Carolina in Congress are seeking answers about why immigrant children are being resettled on the property of the American Hebrew Academy in Greensboro.

The board of the academy announced two weeks ago that it had entered into a 5-year contract — with an option for 5 more years — with the U.S. Department of Health and Human Services to provide a transitional campus for immigrant children awaiting reunification with family members or others in the U.S.

North Carolina is experiencing a massive building surge of large apartment complexes, which is concerning many residents- about where the people are coming from who are going to fill the massive structures.

AND FREE SPECIALIZED SCHOOLS FOR MIGRANTS TOO

On top of that, North Carolina also has special privileges for migrant children in public education, according to a posting on the state site:

We do this by supporting locally-based Migrant Education Programs in:

The NC MEP is federally funded as part of the Elementary and Secondary Education Act, and is regulated by Title I, Part C. http://www.ed.gov/policy/elsec/leg/esea02/pg8.html

State of the Program

The programs serve children and youth who fulfill the following criteria:

After potential students are located, they are interviewed by a program recruiter, who will complete a Certificate of Eligibility (COE), the document that establishes a student’s eligibility for services.

Students who have moved during the school year and who are most at risk for not meeting state standards are given priority for services. The staff at the state level collaborate with locally-based programs to conduct a Comprehensive Needs Assessment and design programs to fit students’ needs.

The Fox article goes on to report about the special digs for Migrants- who are called ‘unaccompanied’ but are not necessarily in the country alone without parents and adults, as we know from Ben Bergquam’s under-cover investigations- because Democrat Joe Biden recently changed the rules about who is considered unaccompanied.

The academy has 100 acres on a gated campus at 4334 Hobbs Road that includes 31 buildings of 412,712 square feet, an $18 million athletic center and natatorium, a variety of athletic fields and even a 22-acre lake. The facility would be used to provide housing, classrooms and other services for children who are unaccompanied or who are waiting for family members and sponsors.

On Thursday members of Congress, led by 9th District Rep. Richard Hudson (R-Concord), sent a letter to HHS Secretary Xavier Becerra and Office of Refugee Resettlement Acting Director Andrea Chapman to ask about the plan, which emerged as a possibility in May 2021.

“Due to the failures of the Biden administration to secure our Southern border, every state, including North Carolina, is now suffering from the impacts of the Biden border crisis,” the letter stated. “Given the effects of this crisis and decision to house UACs in our state, we demand answers to the following questions to help protect our constituents.”

UAC is an acronym that stands for “unaccompanied alien children.”