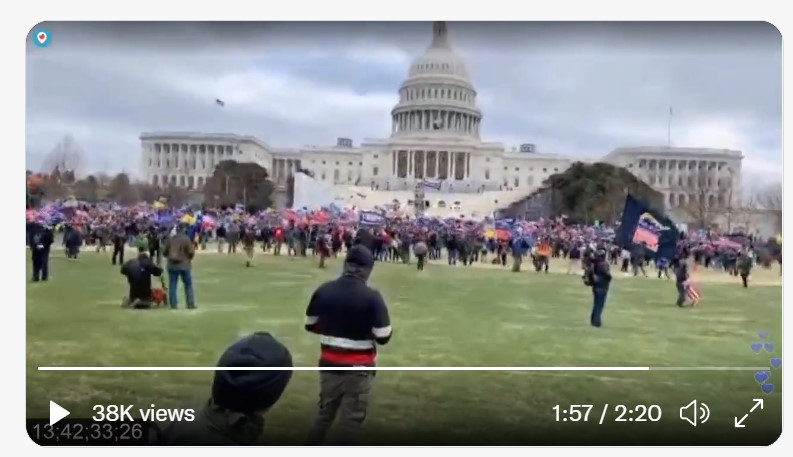 Why were there so many people working to get the crowds of people on the Capitol grounds into the building on January 6th? That is one of the most important questions that the US House Commission is not addressing.

“We want a fair trial, go into the building! Move up, get closer, go in.  Show them we mean business,” organizers are heard yelling as they work the crowd of spectators at the US Capitol.

Even though the organizers used many different tactics to incite anger, people were not obeying.

“I was extremely suspicious of that guy (“scaffold commander”). As I was recording/taking pics, he was getting angry because my group wouldn’t listen to him. We refused to move any closer to the Capitol. He was shouting, “this isn’t a movie! This ain’t no photo op! Move forward!” one eyewitness posted on Twitter about his experience on Jan. 6th.

I witnessed this exact activity, as captured on the video below, from numerous unknown people as well on the other side of the US Capitol that day at about the same time.  Now that our very civil liberties appear to hang in the balance, we should understand what that Democrat-dominated Commission is actually investigating and who their targets are, who they hope to punish.

We also want to know who framed Donald Trump and his supporters?

The fact that Pelosi and the Democrats are not talking about this well know set of circumstances with the organizers, is suspicious.

In this video is a number of people- seen and heard- working the crowd telling people to go in and show force. They were having a very difficult time getting people to move.

The woman recording the video clearly says that if she sees any violence happen she will know that the man telling people to go into the Capitol is a fed trying to get violence.

At one point there is an argument that breaks out, with the Trump supporter saying no, over and over to the organizer who wanted him to move forward and go into the Capitol.

In order to frame Trump as being the instigator of violence on that day, the Democrats in the Federal Government have done everything they can to harass Trump, and get personal information that may be helpful to make him look guilty, even when it is obvious they are ignoring evidence to the contrary.

CNN reported recently on the Commission’s Tyrannical move to get Trump’s financial data- something they have been obsessed with getting for 4 years.

“Trump spokesperson Taylor Budowich disclosed in a lawsuit Friday night that the committee had demanded financial records, prompting him to sue in an effort to prevent the committee from obtaining them. The bank, JP Morgan, was planning to oblige, giving him a deadline of 5 p.m. ET on Christmas Eve to show he legally blocked the subpoena, according to a letter the bank sent to him that he included in the lawsuit.The lawsuit also discloses that Budowich has already supplied the committee with more than 1,700 pages of documents and provided about four hours of testimony. It’s not presently known if the bank has already turned over the financial records, since Budowich’s lawsuit against the committee and the bank attempting to block the subpoena is already later than the deadline. The federal court in DC has not responded to his filings as of Saturday morning and his lawsuit may be a Hail Mary pass unlikely to succeed because of both the timing and federal appeals court rulings in the past.”December 24th is federal holiday. The federal courts are closed. The Capitol is closed. National banks are closed,” Budowich’s lawyers wrote to the court on Friday, asking for emergency help. “Mr. Budowich’s counsel immediately reached out to JPMorgan to seek an extension. JPMorgan refused. Mr. Budowich reached out to counsel for the Select Committee for an extension. The Select Committee refused.” LOOK AT HOW THE LEFT FRAMES TRUMP

Consider what left-leaning, taxpayer-funded NPR has to say about Jan. 6th, ask yourself if they are open to exploring the many people who have been recorded by patriots directing people to be angry and to go into the Capitol :

DEMOCRATS ONLY SEE A THREAT TO THEIR DEMOCRACY

“It’s been nearly a year since the United States suffered an unprecedented attack on constitutional democracy.

January 6: Inside The Capitol Siege

When a violent mob stormed the U.S. Capitol on Jan. 6, the goal was to overturn the results of the 2020 presidential election and install Donald Trump to a second term.

Call it an insurrection or a coup attempt, it was fueled by what’s known as the “Big Lie”: the verifiably false assertion that Trump won. Joe Biden won 306 votes in the Electoral College, while Trump received 232. In the popular vote, Biden won by more than 7 million votes.

The Capitol siege: The cases behind the biggest criminal investigation in U.S. history

Many are warning that over the past year, that “big lie” of a stolen election has grown more entrenched and more dangerous.

“I’ve never been more scared about American democracy than I am right now, because of the metastasizing of the ‘big lie,’ ” says election law expert Rick Hasen, co-director of the Fair Elections and Free Speech Center at the University of California, Irvine.

IF IT IS SO BIG, WHY DO THEY ONLY INVESTIGATE PEOPLE WHO CONFIRM THEIR POLITICAL BIAS?