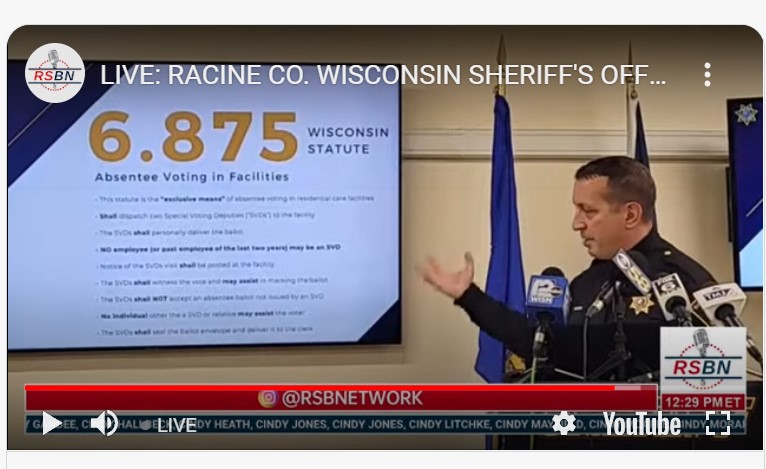 The Racine Sheriff’s Department had a press event on Thursday to expose their investigation into voter integrity during the 2020 federal election. The Racine WI Sheriff said that the election law was “shattered” by the Wisconsin of Election Commission.

“They suspended the laws about absentee ballots, and that was illegal,” the lead investigator told the media. “They intentionally violated the laws. The penalty for what they did, decided by the legislature is a class I felony. The law has been violated when the proper procedures are not followed. The Election Commissioner admitted that they broke the law,” the investigator said as he played clips, for the media, of two commissioners admitting they were directing people to break the law.

The Sheriff’s department had 8 family members present, who filed complaints that their loved ones were not coherent enough to vote, from the same retirement facility.

“If the government passes a law, they need to abide by the law ,” the spokesman for the Sheriff told the press about the procedures that should have protected those people.

Fox News reported in the presser:

“Racine County Sheriff Christopher Schmaling will unveil on Thursday, Oct. 28 the results of an extensive investigation regarding possible election law violations throughout Racine County and Wisconsin.”

Attorney Phil Kline reacted to the Presser and wrote:

“Racine WI Sheriff says the WEC allowed nursing home staff to fill out ballots for residents, including those with severe mental decline. Staff apparently filled out ballots for whatever party the resident could recall last voting for, and administrators “hoped” they’d be honest.”

“Using COVID as an excuse, the Wisconsin Elections Commission instructed cities to violate the law, which requires sending Special Voting Deputies (1 from each party) to nursing homes. Instead, staff performed the function without oversight.”

At question is why the WEC changed the law when they did not have the authority to change the law. “We know that COVID is scary, we get it but these laws can not be changed even in the face of an emergency,” the investigator said.

The case started from a complaint from a woman Judy, whose mother, Shirley, had died before the election but voted in early voting. According to the Sheriff, Shirley was very ill and delusional, and yet somehow had voted through a third party, Shirley’s facility.

The daughter filed a sworn affidavit to WI election commission, that the facility took advantage of her mother that they filled out a fraudulent ballot in her Mother’s name.

The investigator said the WI Board of Elections blew it off and forwarded to the District Attorney, and that is where the investigation into the actions of the WEC began.

In the presser, the investigator laid out his timeline and said there was corruption in the WEC, and called for the attorney general to investigate to restore some integrity and trust into the election and the systems.

The Sheriff discovered that the laws dealing with absentee ballots for numerous residents of the  was not followed and was illegally changed, and uncovered that one member of the WEC was worried about corruption in retirement facilities producing fraudulent ballots.

President Donald J. Trump released a statement about Wisconsin, on Wednesday that the WI Senate is set to investigate the election:

ICYMI: "Wisconsin Senate to launch its own 2020 election investigation"https://t.co/z762pFsoDw pic.twitter.com/rZVT9m58AX