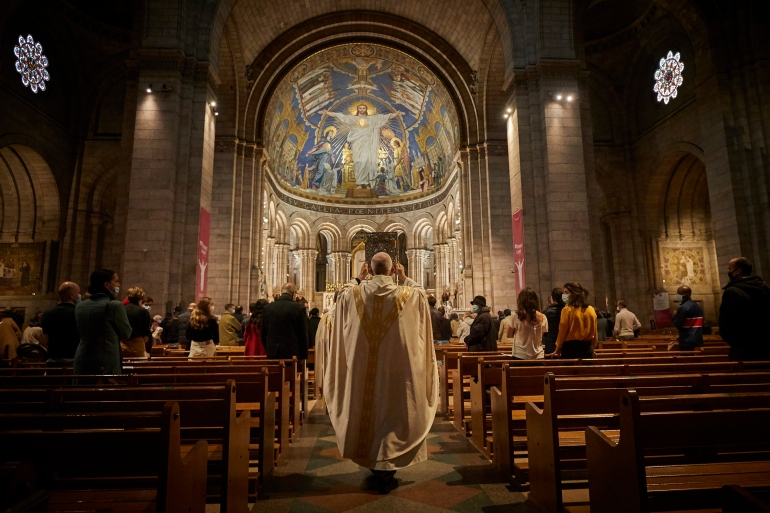 The United States is in a spiritual battle, not just for the country’s soul, but the souls of the lost men and women who are separated from God. But, unfortunately, Satan worship is now common culture, pushed upon our citizens, even our children, right out in public, as seen this week in Houston, Texas.

At a music festival featuring Travis Scott and Drake, their audience appears to have been pushed and degraded, some to death. At the same time, the musical performance unfolded and didn’t stop even in the presence of dead bodies. Some people are even calling the act a “sacrifice.”

On their social media, numerous concert attendees shared that they were so scared at the demonic concert that they were planning on going to Church to pray.

And at least one Catholic Church is preparing to receive them.

The National Catholic Register reported on Friday about one prayer vigil:

HOUSTON, Texas — When a parishioner suggested that a local Catholic church in Houston, Texas, hold a prayer vigil for the victims of the Astroworld music festival stampede victims, the pastor took immediate action.

“It’s important that the Church be in the mix and engaging people to have faith in God and to turn to God in joys, as well as in sorrows,” Father Paul Felix, the pastor of the Church of the Annunciation, told CNA.

A 22-year-old Texas A&M student caught in the crush Nov. 5 at NRG Park died Wednesday, her family announced, bringing the death toll from the stampede to nine, the Associated Press reported. Hundreds were injured, and a 9-year-old boy remains in a medically induced coma, according to the AP.

The stampede came as rapper Travis Scott performed on stage for a crowd of 50,000. The event is now considered one of the deadliest U.S. concerts. A criminal investigation is underway.

In response to the tragedy, Houston businessman and Annunciation parishioner Jim McIngvale approached Felix the following Sunday about holding a prayer vigil at the Church, a 15-minute drive from NRG Park. When Father Felix said yes, McIngvale, the founder of Gallery Furniture and known in Houston as “Mattress Mack,” played a central role in publicizing the event.

Father Felix presided over the vigil for the deceased taken from the Order of Christian Funerals.

“I just applied it to a number of people who had died as opposed to a vigil for a single individual,” he explained.

After processing out, he returned to lead a rosary.

The Catholic Church has, like the Evangelical Church, had decades of scandals for which they must cleanse their laity and rebuild their religious foundations.

There is evidence that the Catholic Church is focusing, in some place, in atonement and rising to lead a lost nation.

Priests are reaching out to a hurt world.

Father Felix pointed to two main purposes of the vigil, according to the article:

“Our Lord calls us to do the corporal and spiritual works of mercy and this is certainly in that category — a spiritual work of mercy,” he said. Father Felix also stressed the importance of the Church finding ways to interact with an increasingly secular society.

“We’re very interested in positively engaging the community and helping people understand that prayer is appropriate in all circumstances,” he said, “and so, just having kind of open arms, so to speak, because the Holy Spirit can work through these things, I think, and bring people to faith and even create awareness among others who are non-Catholic to see the loving, caring face of the Church.”

Father Felix listed the second purpose of the recent prayer vigil as a “manifestation to embrace people and show caring concern, prayerful concern for those who died as well as their families and those who were injured and for their families and a very traumatic event.”