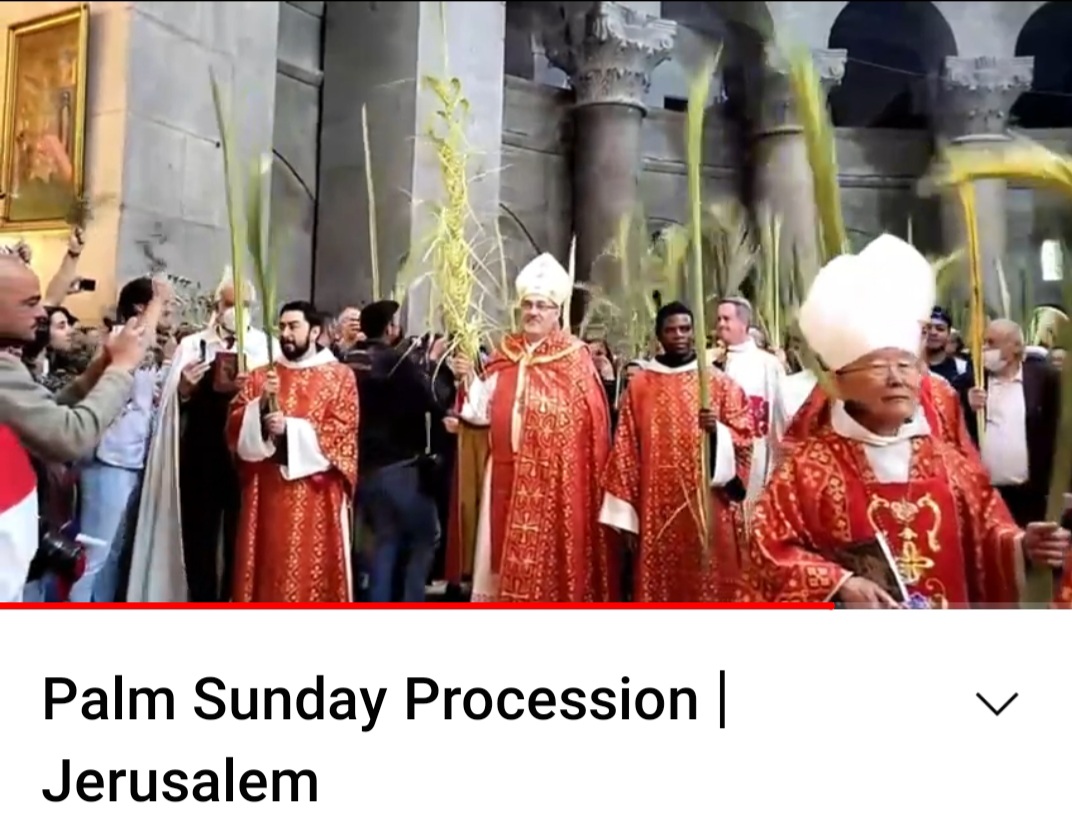 Sunday, April 10 is Palm Sunday when Christians of all denominations remember the joyous day when Jesus showed the ultimate rebellion to the corrupt governing authorities, in what is a week of events that led to the crucifixion of our Lord and savior.

Below is a video of the Palm Sunday Procession presided over by HB Pierbattista Pizzaballa, Patriarch of Jerusalem of the Latins, at the Basilica of the Holy Sepulcher in Jerusalem. They describe themselves as “communication at the service of the church in the Holy Land. With Christian ecumenical and interreligious content in various languages.”

One thing we know for sure, Jesus did not like the corruption in the government, and his ministry was focused on the liberation of the common man and woman. After Palm Sunday Jesus proved his steadfast dedication to the poor and the marginalized of the world, in a way that would shock humanity for thousands of years to come.

The life and times of Jesus is a beacon of hopefulness- that God is in charge- even when the world looks very dark and unjust.

Palm Sunday is a triumph for Jesus, and for his followers.  And for the world who is yet to know Him.

What’s the context of Jesus riding into the capital city?

When he entered Jerusalem, the whole city was in turmoil.

Do you remember the only miracle in all four Gospels? Jesus feeds hungry people. Jesus feeding the multitudes.

We read the story of Jesus feeding the 5,000 as a miracle of the five loaves and two fish.

In the Gospel of Luke and the Gospel of Mark, the men are gathered into groups of 50 and 100. This means nothing to us, today, but the numbers were significant to the first Christians… and to the Roman authorities who controlled the region.

In the Roman army, soldiers were grouped into centuries – groups of 100 men.

So, from the Roman perspective, it appears that Jesus was gathering his followers, perhaps as many as 5,000, training them to form into units of 50 and 100. And leading them into the city.

The Roman leaders saw Jesus leading a massive uprising into Jerusalem, the largest city in the region, just in time for Passover, one of the oldest and most important Jewish holidays.

“Palm Sunday represents the threat Jesus posed to the government.”

On Palm Sunday, Jesus calls us towards the city of Jerusalem, and the Passover celebration.

After entering the city, Jesus goes to the Temple. The holiest of Holy places. And he is shocked by what he finds. Money changers, bankers. Vendors selling birds, goats, and other animals for people to sacrifice to God.

Jesus sees that money and animal sacrifice are the focus at the Temple, not God, and he drives out the people who defile the House of the Lord.

By attacking the religious status quo, by extension he attacks the Religious leaders.

So, very quickly, Jesus alienates the military occupiers who control the government and he undercuts the authority of the religious leaders.

Jesus offers his followers a different way to be.

Jesus reminds us, that who we were in the past, doesn’t bind us to what we may become, in the future. Just as the story of Jesus doesn’t end at the cross, but continues to an empty tomb, our stories don’t end with who we are, but continue to who God calls us to be.

Let me make it plain. Who you are, is not who you have to be. When God calls you, God transforms you into a new person. Jesus offers new ideas, a new view of things, a new way of living.

Jesus is calling us to follow him in a new way.

Gathered with his friends in the upper room for the Passover meal. Passover is still celebrated by Jews to this day.

This is the beginning of Holy Week.  May something inspiration be found during the next 7 days.