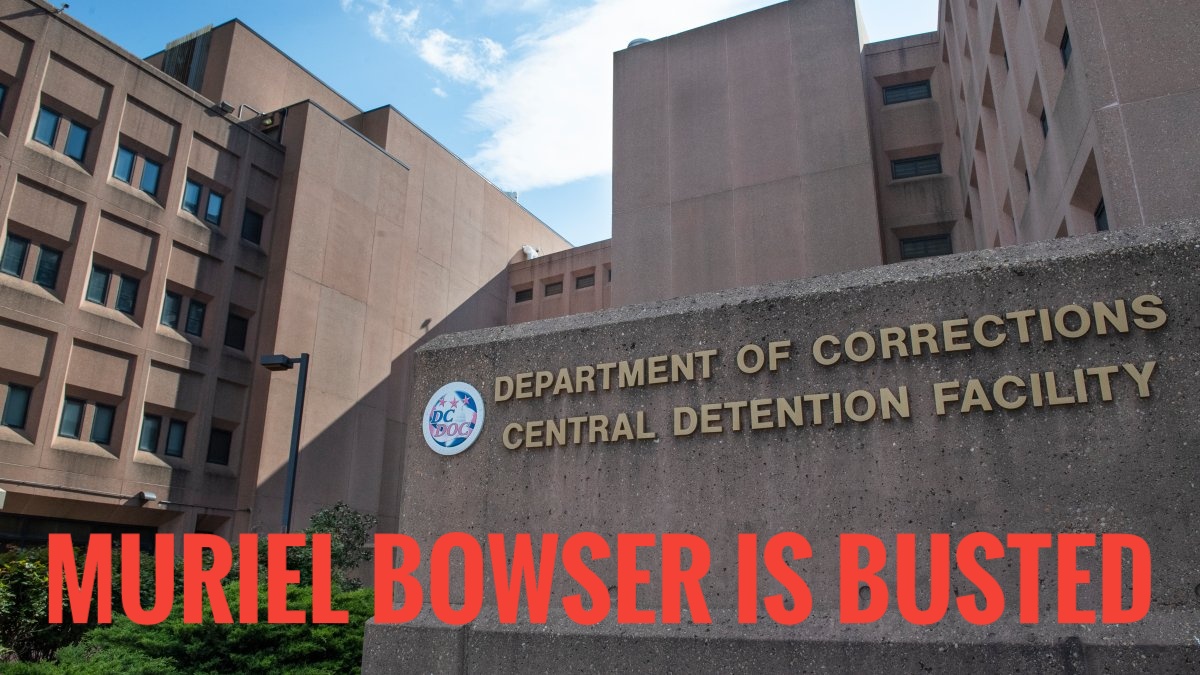 Suzzanne Monk is a seasoned activist in the D.C. area. She is the founder of ReOpen America and has been in D.C. She has had working relationships with numerous lawmakers on Capitol Hill for so long. That is important in the world of activism.

Monk, confronted with the knowledge of the terrible treatment by Democrat Mayor Muriel Bowser to detainees in the D.C. prison, contacted U.S. House Oversight Committee members who oversee the D.C. prison.

They sent a letter to the Democrat Mayor of DC, Muriel Bower, who ignored the letter.

Monk continued to keep in contact with her contacts and asked them to investigate what Monk said was inhumane treatment. She said prisoners were being denied things and that the prison was in disgusting shape.

Together Monk and I broke the story of her activism for the Gateway Pundit in June. And we updated her activism here for Frontline America, proving that legislative action has tremendous power to change things when done right.

I wrote for The Gateway Pundit:

“The U.S. House Oversight is threatening to investigate the condition of prisons in D.C. where prisoners, including those held since January 6 for Capitol Hill offenses, are being held in solitary confinement, claiming Bowser is not ready for D.C. Statehood until she complies with their requests.

U.S. Rep. James Comer (R-KY), the Republican leader of the U.S. House Oversight Committee, sent Washington DC Mayor Muriel Bowser a letter in April, requesting information about Bowser’s established draconian conditions in D.C. jails keeping prisoners under her jurisdiction in solitary confinement for up to 23 hours a day. Further, Bowser’s refusal to answer to the U.S. House impacts her pursuit of Statehood for D.C. According to one local activist who has studied the situation, she has even made the situation worse because of the investigation.”

In July Marjorie Taylor Green and Louie Gohmert intervened as well, which they did, and were chased out of the prison for asking about the detainees and their condition. I covered that story for David Harris Jr. Media:

In October, I reported on Monk’s update for Frontline America:

“Local DC activist Suzzanne Monk, the founder of ReOpen America, has worked at her conservative political activism by building relationships with lawmakers in the area. That tactic paid off for her when she told one of her contacts about a situation in the D.C.C. Prison that Monk said she felt was destined to turn into a humanitarian crisis; the detainees from Jan. 6tU.S.U.S. Capitol, supporters of President Donald J. Trump, were turning into political prisoners, and no one was paying attention. But as of mid-Oct, the whole world knows that we have an American Gulag Archipelago unfolding.

“In a major rebuke of the Justice Department D.C.D.C. Department of Corrections, District Court Judge Royce Lamberth today found the jail’s warden and director of the Department of Corrections in contempt of court for refusing to turn over records related to the care of Christopher Worrell, a January 6 detainee who suffers from non-Hodgkin’s lymphoma and a broken hand. He has been incarcerated under a pre-trial detention order sought by Joe Biden’s Justice Department and approved by the court’s chief judge since his arrest in March; Worrell has been in D.C.D.C. jail used specifically to house January 6 defendants since April,” reported Julie Kelly for AM Greatness.”

VICTORY- November 2, the announcement was made that the prisoners would be moved due to inhumane treatment of prisoners. Monk called and gave me the news.

From June- to November, 6 months, Monk stayed involved and focused on the treatment of prisoners.

“Louie Ghomert is a friend, he has been really helpful to me. I am glad we were able to get some changes made for the men and women in the D.C. prison because the conditions they were living in were terrible. Activism is about staying on task. We had a lot of people making phone calls over and over and and we got the job done,” Monk told me in reaction to the Washinton Post story that her hard work had paid off and the prisoners in D.C. would be moved.

And because of Monk’s consistent activism and top-notch contacts, she was victorious. Monk’s actions set in motion an investigation by the U.S. Marshals that resulted in them affirming her original findings.

DCist.com reported on the investigation of the U.S. Marshals which caused rebuke of the D.C. Prison:

In a statement, the U.S. Marshals Service said its inspection “was prompted by recent and historical concerns raised regarding conditions at the DC DOC facilities, including those recently raised by various members of the judiciary.”

The U.S.M.S. conducted the inspection from October 18 to October 23, according to a memo acting U.S. marshal for D.C. Lamont J. Ruffin sent to D.C. DOC Director Quincy Booth on Monday. Inspectors interviewed more than 300 people in federal custody being held in the D.C. Jail.

“Based on the U.S.M.S. inspection, I believe there is evidence of systemic failures, in particular at the Central Detention Facility (C.D.F.), that may warrant further examination by the Department of Justice Civil Rights Division,” Ruffin wrote.

Ruffin said he was still preparing a formal summary of the inspection, but outlined some of the inspection’s findings in the memo. The memo said that it appeared people detained at the jail were being denied food and water “for punitive reasons.”

It described an overpowering smell of urine and feces in the jail, caused by large amounts of standing human sewage in the toilets of multiple occupied cells. Water in many cells in two units, South 1 and North 1, had been shut off for days, according to the memo. This prevented people in those cells from washing their hands, flushing toilets, or accessing drinking water. People in the jail were being served congealed and cold meals, according to the memo.

Monk is a public speaker on the power of grassroots activism.