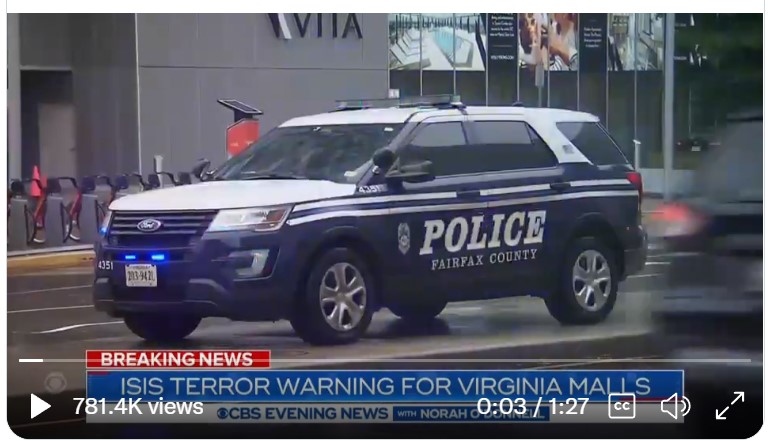 On Friday, law enforcement officials began to alert the public in Virginia to a highly credible terrorist threat. It started with people posting screengrabs of an email about a possible terrorist attack at a shopping mall over the weekend.

Key Note: The terror alert came from military sources, not from the White House or the intel agencies, according to reporting on the WarRoom Pandemic podcast.

Then news began to surface that law enforcement was taking all precautions for an actual terrorist attack. As reported on The War Room Pandemic by Jack Posobiec, the source of information was that one of the men involved had flipped and given up information about the attack’s planning and that military enforcement had been investigating the situation for some time.

US Rep Lauren Boebert slammed Democrat Joe Biden for his reckless policies, which contributed to the drama.

“IC member tells @HumanEvents that at least some members of the ISIS cell in Northern Virginia had been locked up in Bagram but were let out by the Taliban and made their way onto planes at the Kabul Airport,” Posobiec reported on Saturday.

As predicted by Real Americas Voice, Ben Bergquam, the situation could be a 9-11 style attack, which is generally expected to happen due to the number of illegal invaders the Biden administration is being brought into the country and given free rein.

We know that terrorist groups are well funded and equipped due to Biden’s actions, and the borders are wide open because of Biden’s actions. It is unclear where Bidens alleged 81 Million voters are and if they approve of this behavior.

Please share this article to help support Bergquam and his journalism and help prepare Americas about the threats we face and must protect ourselves and our families from.