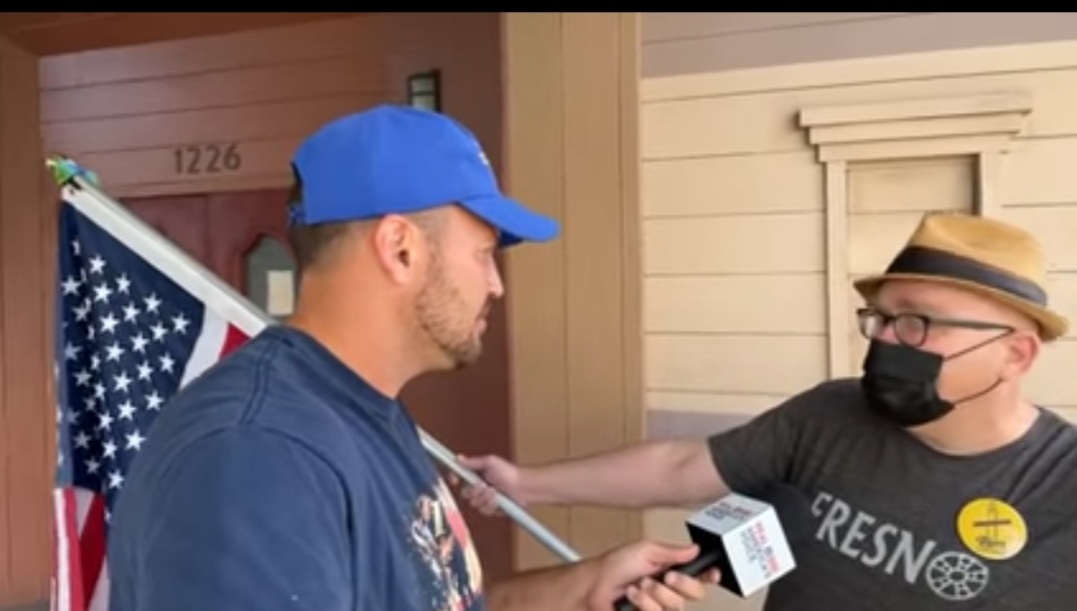 Ben Bergquam, the founder of Frontline America and a reporter for America’s Real Voice attended a protest of a Christian church moving into an empty theater in an area called the “Tower district” in Fresno. The California town has seen numerous conflicts over the past three months involving different groups.

“The church being here in the Tower Theater area represents a radical change to this area, that is not wanted because we want the LGBTQ community here,” one protestor told Bergquam. “Having a church here puts these businesses in danger.”

A Christian church met briefly in the theater that had been purchased by them, which set local LGBTQ activists to the street to demand the church close down, because they say the sale of the church was done in secret.

As soon as Bergquam set the scene for his coverage that day, two leftist protestors in attendance started to blast music in the background in an attempt to trigger YouTube to shut down his coverage due to copyright issues. After praying over the scene, Bergquam is seen discussing the motivation for the protest of the area with the two of the most vocal activists, who explained their point of view through clenched teeth at some point.

“This is a culture arts landmark. The church being here would impact the neighborhood,” One participant said awkwardly as if he were trying to remember some foreign talking points. A second participant showed up with a better command of the talking points and interacted with Bergquam.

“Ok, here is the thing, that theater is not zoned for religious assembly,” the second participant said tersely, pointing at the Tower Theater across the street from him. “That is the whole issue right there,” he told Bergquam.

“It is a theater, it has not been a church, because they have not met there since January because of a cease and desist order, and they are not zoned to be a church. They are zone to be a diverse area and draw diversity,” he said waving a rainbow flag.

“A church does not have the same economic vitality. There is a vibrant economic zone. It is an established economic area here and changing that to a church will change the area,” he said to Bergquam.

Bergquam had visited the area in late March, and met with another angry leftist who honked his horn and attempted to drive him away.

Back at the scene of the protest, a woman from a Lawyer’s guild tried to shut Bergquam down for not being the kind of media, she insisted no one speak to him,  yet Bergquam persisted and got numerous interviews.

Bergquam and the man who appeared to be the lead community organizer interacted for some minutes, and exposed very different points of view on culture.

Bergquam reminded his viewers of the police officer , Rick Fitzgerald, who had been fired for viewing a previous protest in the area.

The video goes on with interviews of people on both sides of the issue.