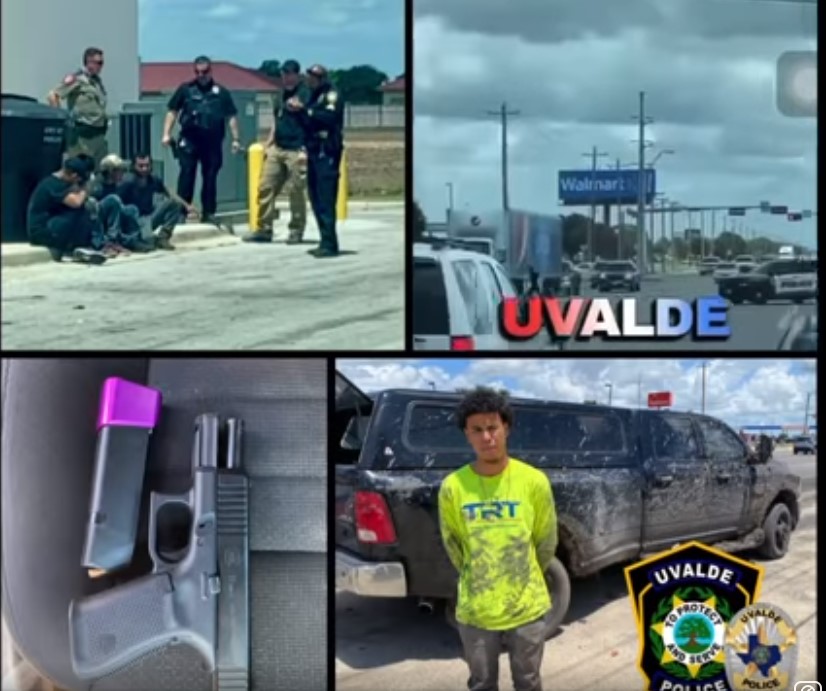 The small town of  Uvalde, Texas, with just under 17,000 residents, is experiencing a tremendous rise in vehicular crimes this year, among all other issues they have to deal with. It impacts all citizens who rely on a peaceful society where people trust citizens to obey laws to protect each other’s safety.

Imagine such wanton disregard for citizen’s safety that people routinely lead police on high-speed vehicle chases and then stop the car, while riders bailout, and run widely into the community, leading law enforcement on foot chases. Unfortunately, at least one America community is experiencing that 2-5 times a day. Every day.

WHAT IS A BAILOUT?

“Groups of illegal aliens crammed into cars being chased by Border Patrol, who stop suddenly, while occupants of illegal aliens pour into the streets and scramble into the community is called a bailout. We are told law enforcement is concerned about hit and runs, gun crimes and kidnappings, so they do lockdowns in the area where the bailout happens,” Ben Bergquam told me. Bergkamp is the lead investigative reporter for Real Americas Voice and an expert on issues at the Southern border.

EXAMPLE OF A BAILOUT

On Monday afternoon, an update from Southwest Texas Junior College rolled over my Facebook feed, most likely because someone on my friend list responded to the post from the school about a “lockdown” of the students over a “bailout” near the local Walmart and the school.

Responses from other posters mainly were, “What is a bailout?” and “Why are kids being locked down”?

I didn’t know what a bailout was either, so I called the school, the campus police, and the city police department to investigate. Here is what I discovered.

AS IF MASKS, COVID, AND OTHER NONSENSE IS NOT ENOUGH, THIS SCHOOL NOW HAS ILLEGAL ALIENS COMMITTING CRIMES IN BROAD DAYLIGHT TO WORRY ABOUT

Key Point from the school’s public information director, Ismael Martinez, is that the community is fully aware of what bailouts are because they hear the term a lot in their small community.

Martinez told me that the school is located 40 miles from the border, and the town is experiencing a high volume of “Human Smuggling,” which has steadily been increasing over the past six months.  There were no students on campus at the time of the announcement on Monday, but the school authorities locked down the school to protect the staff who were on campus preparing for students to start next week.

Key Point from the local police, Human Smuggling and Human Trafficking are two different things.  I spoke with the Public Relations department at the City of UVale Police, Jessica Zamora, who wanted me to understand the difference between Smuggling and Trafficking.

According to the US Department of Homeland Security, Human Trafficking is defined as:  Human trafficking involves the use of force, fraud, or coercion to obtain some type of labor or commercial sex act.

According to ICE Human Smuggling is defined as: Human smuggling is the illegal importation of people into a country via the deliberate evasion of immigration laws.

Zamora told me that undocumented criminals were leading law enforcement on high-speed chases after a traffic stop and that they went on all hours of the day and night. That police could experience between 2-5 of these types of things in a 24-hour cycle.

“These things happen a lot in South West Texas, but we have so much of it here in our area that even Tucker Carlson was here and investigating,” Zamora told me.

“We are bringing people through from 67 countries, and this is the biggest scam on the American people,” Mayor of Uvalde Don McLaughlin told Tucker Carlson in May.

Key Point: This small town is under siege because of Democrat Joe Biden’s open border policies.

For further reading on Human Smuggling:

Law enforcement in Texas wants people to understand the definition of "Human Smuggling".