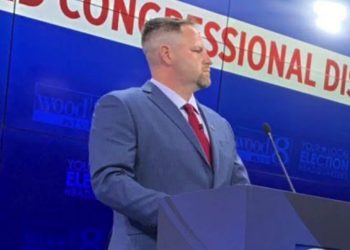 Republican Tom Norton is a GOP primary challenger to  Michigan US House Rep. Peter Meijer.  Meijer not only voted to Impeach President Donald J. Trump, but he also worked in coordination with Democrat Joe Biden on the direction of the Afghanistan military pullout. Norton took the opportunity of Biden’s Afghanistan crisis to highlight his opponent’s support and enabling of the disaster. The following is Norton’s op-ed:

After September 11th, the guilt of not serving while so many others bore that obligation in my place overwhelmed me with guilt, so I joined the Army National Guard in hopes of deploying in the Global War on Terror. I got my wish in 2011 and was deployed to Afghanistan.

Watching the withdrawal under President Biden has caused some of my memories about bad policies to resurface.

One was of the Obama-Biden Administration tying the hands of soldiers. Under his administration, we practiced capture and release with terrorists. We would capture Taliban soldiers who were trying to kill us and were required to release them. We were also not allowed to shoot first, and shooting back required requesting permission up the change of command. The Taliban and radical Islamists do not play by those rules.

The Obama/Biden administration also forced soldiers to stand by and watch Afghan men rape young boys which they considered a “right of passage.” Obama/Biden told us we could not interfere.

The military was not capable of doing background checks the Afghan they chose as partners due to the lack of any public record system in a stone-aged country. Two of the soldiers I was assigned to training to be in the new Afghan Army were discovered to be members of the Taliban; the administration’s decision wasn’t to imprison or interrogate them but to set them loose. The same treatment applied to a translator we discovered was an Iranian spy.

The most horrific problem was when our Afghan “allies” whom we were training would execute my fellow soldiers with a bullet to the back of the head. The most infamous instance when service member was executed while video conferencing with his wife. In order to maintain the façade of cooperation between our military and the Afghans, the Army tried to deny it ever happened, but it happened many times.

Joe Biden is now blaming President Trump for the humiliating withdrawal. But Biden had direct interaction with this war longer than anyone: eight years in the Senate plus eight years as Vice President. For sixteen years of this twenty-year war, Biden has been the leading culprit of our many failures. If anyone is to blame for where we are, it’s the man in the White House.

And now he and his ally, Congressman Peter Meijer, want to commit another grave error by relocating tens of thousands of unscreened Afghan refugees to our homeland.

I agree we need to find a home for these Afghanis who have been helpful to us. But we cannot accept the risk of a refugee killing our citizens, shoot up a nightclub, or blowing up a city. Let there be no mistake: the Taliban is resolved to kill and has embedded themselves into these groups. We have other places we can send them, like Jordan or Turkey. They must not be allowed to settle here.

I am running to defeat Peter Meijer and stop President Biden from making yet another error that gets our innocent countrymen killed.