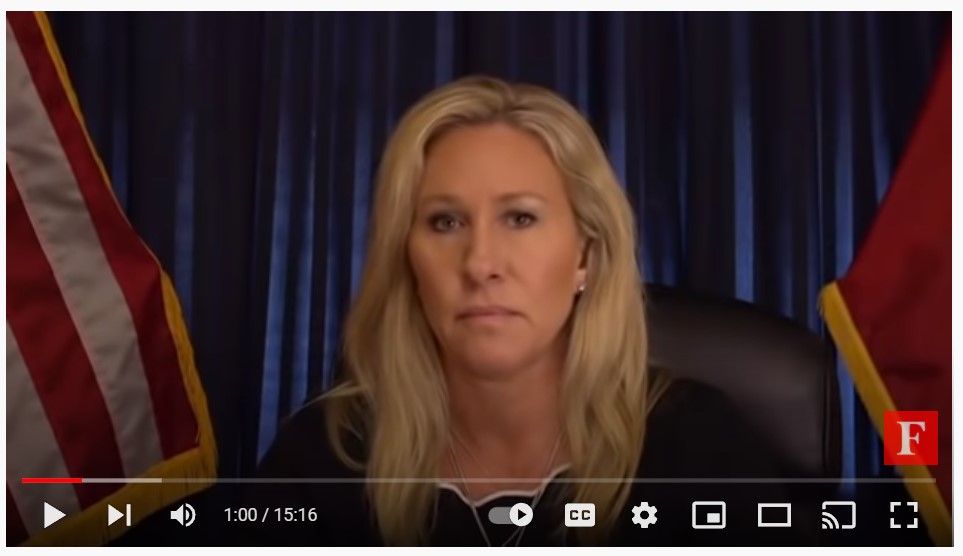 Warning- what you are about to hear- if you click on the link below- is an example of the types of death threats that were left for  Republican US Representative Majorie Taylor Greene at her office on Capitol Hill. The contents of the audio she plays are disturbing and chilling.

“It is never ok to leave death threats for any member of Congress,” Green said to her audience, before playing three very bizarre messages, from people who obviously have mental dysfunctions.

Forbes, who posted the video reported:

“In a video released to social media, Rep. Marjorie Taylor Greene (R-GA) played death threats left against her on voicemail.”

The callers have a mad frenzy to their voices, a sort of possessed sound to them, which Greene says is a consequence of having the US Media sowing hatred toward members of Congress, and division to the population.

Greene points out numerous inaccuracies and false statements by the US Media, about her and other supporters of President Donald J. Trump, which have led to mass disinformation and anger.

Please remember the messages are gruesome and upsetting.

Taylor is a vocal and determined proponent of America First Policies, and an outspoken critic of the Socialist-Marxist- Communist revolution in America. Her bold stand has earned her top billing to be hated by both the RINO right, like Mitch McConnell- and the radical far left.

Greene opposes more lockdowns of the US Economy and for that she has been vilified by both RINO Republicans and Democrats, who want to see more lockdowns and more restrictions on Americans.

A recent post of Greene’s made the RINO-Left alliance go to war with her on social media.

Seems Majorie Taylor Greene thinks cancer is contagious so I apologize to everyone I’ve come in contact with in the past few months as I might have given you my cancer. pic.twitter.com/q4wjoVwbOG

Majorie Taylor Greene is a cancer on society. That’s the tweet.

Calling Greene a “cancer” is an established talking point for the alliance that fights against Greene’s America First agenda.

The Daily Mail, in February, reported on a poke at Greene from her own party over Greene’s ideas. Mitch McConnell who is well known to be aligned with the Communist Party jumped into bed with the left to discredit Green and call her cancer, while at the same time elevating a Republican who was anti-America First.

From the Daily Mail:

The left, the RINO right and the media push out hatred for Greene on a regular basis, and now we see the consequences.