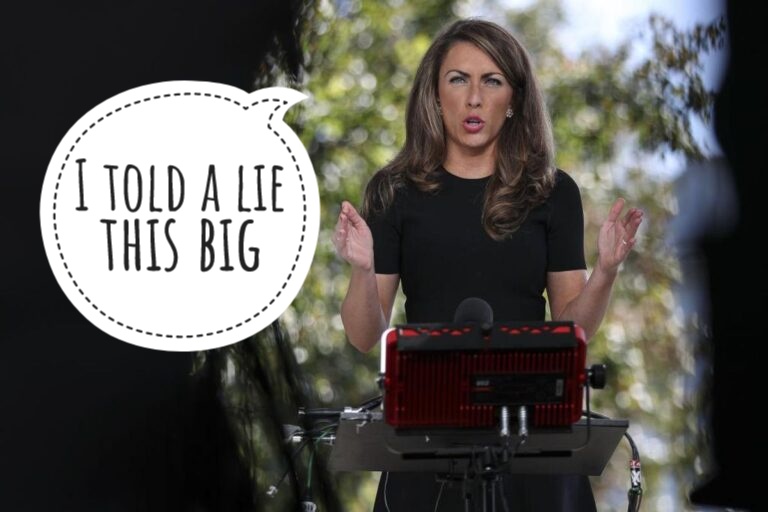 President Donald J. Trump, while he was battling for the soul of the country, was betrayed by many heartless political climbers, who slithered up to him for power, and then stabbed him the back as soon as they could get some power and attention for their betrayal.  They did it proudly- in the ways that evil loves to brag- and Americans should pay attention to these narcissists and not give them more power.

Key Point: In Christian tradition, consuming the fruit of the tree of knowledge of good and evil was the sin committed by Adam and Eve that led to the fall of man in Genesis 3. Perhaps Farah “took a bite of the apple” and got a little too much fame?  With that in mind, listen to the story of Alyssa Farah.

Trump released a press statement on Monday about Farah, who has been getting media attention this month lying about her interactions with the former boss:

“Heard that Alyssa Farah was terrible on The View—they could have asked the people who know her and saved a lot of time. She was a “backbencher” in the White House, and is now a nobody again. We put her out there to face the public as little as possible.

It’s amazing how these people leave with respect and adoration for me and others in the White House, but as soon as CNN or other cameras get shoved in their face, or the losers from the The View ask a question, or money gets thrown at them, or someone writes a fake book, inglorious lightweights like Farah change so quickly. I watched this clown on television saying exactly what they wanted her to say and I watched the lies. Was she paid by low-ratings CNN?

By the way, as soon as the Crime of the Century happened on November 3rd, I knew the Election was Rigged and Stolen, and never changed my view on that one bit. I did not go soft on the “Real” Big Lie, the Election Scam, and never will.

Backbencher said I told her I lost the Election—never did. I virtually never even spoke to Farah (it’s like she didn’t even exist in the White House). Anybody who ever says that I thought the Election was legit, even for a moment, is wrong. All you have to do is look at the thousands of pages of documents and evidence—which continues to mount.

When we told Alyssa to “hit the road,” she wrote a very nice letter stating that working for “Trump” was “the honor of a lifetime” and she was “deeply proud of the incredible things we were able to accomplish to make our country stronger, safer, and more secure.” Show the rest of the letter Alyssa, and explain why you wrote it!

Farah, according to her Bio is “Alyssa Alexandra Farah is an American political advisor who was White House Director of Strategic Communications and Assistant to the President in the Trump administration in 2020.”

Farah’s shallowness is obvious on her social media she shows no remorse at all, after bragging about her access to President Trump who gave her so much, she is bragging about how little she cares for being rebuked by him:

Heading out on our honeymoon! Apologies in advance if I’m MIA, I’m busy living my best life ✌🏻 🏝 🍹

I see I have honeymoon well wishes from my former boss! Too kind! 🙃