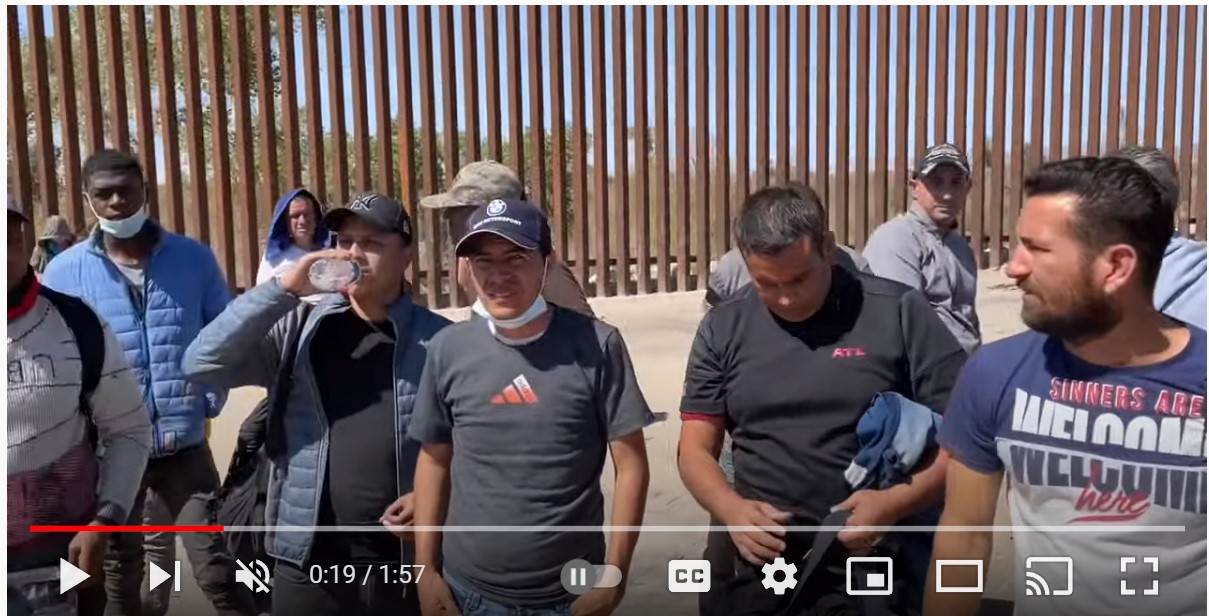 Where the wall ends in Yuma, Ben Bergquam filmed a group of 50-60 men from socialist countries, who were being left at the border, after paying 6-10,000 dollars to Mexican drug cartels to cross and get here.

“llegals from Cuba, Colombia and Venezuela invited to simply walk into America. Yuma is completely overwhelmed! Biden’s open border policies only benefit the cartels and threaten the future of America. Real America’s Voice News,” Bergquam reported about the following video.

“I have never seen anything like this before. Border Patrol is saying there is nowhere to keep these men, because they are full. Ending title 42- which will magnify this times 100,” Bergquam said.
Watch:

According to Center for Immigration Studies Title 42 is a concern:

“In my last post, I noted: “It is past time for the president to get serious about how bad the Southwest border has become.” It appears that DHS, at least, is getting serious about how much worse illegal immigration is going to get once expulsion orders issued by CDC under Title 42 of the U.S. Code in response to the Covid-19 pandemic expire. The department’s planned response appears to be too late, though an (unlikely) White House policy shift could restore order to the U.S.-Mexico line.

Title 42. Various iterations of Title 42 orders have been in effect since late March 2020, and direct the expulsion of illegal migrants, as well as aliens at land ports of entry who lack proper admission documents. At the outset, those orders were enforced fairly rigorously: Of the nearly 518,500 aliens CBP encountered at the Southwest border (the sum of Border Patrol apprehensions of illegal migrants and aliens deemed inadmissible by CBP officers at the ports under Trump, more than 452,100 (87 percent) were expelled.

Since the outset of the Biden administration, Title 42 expulsions have dropped as increasing numbers of migrants have been processed under the Immigration and Nationality Act (INA) instead. Last month, of the nearly 165,000 aliens encountered at the Southwest border, just over 91,500 were expelled under Title 42 (55 percent). The rest were processed under the INA.

Of the aliens who were not expelled by Biden’s DHS under Title 42, tens of thousands have simply been released into the United States, although section 235 of the INA mandates their detention.
Read more here.