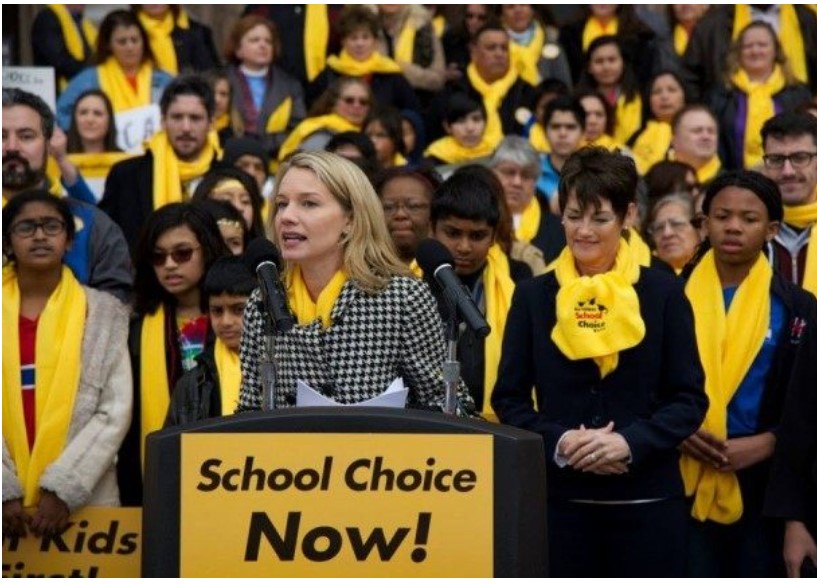 Public education has been successfully disrupted by the left, but their control over the United States population has been broken in ways usurpers of schools may have never imagined.  With all of the powerful political attacks on the average American by the Democrats in power, the average person may not have noticed that the left is losing its grip.

Americans have been trending to break the public education monopoly for years.  In 2020 and 2021, the resistancleft’she left’s domination took on a new passion with national headlines of horror stories about conflicts over Critical Race Theory, Culturally Responsive Teaching and, Panorama surveys that are designed to invade a student’s private life.

As kids were forced to do online schools because of the COVID pandemic restrictions in 2020, parents got an intimate view of how their children were being taught. And then parents became more political then ever.

The political trends on school issues are bad news for Democrats- and good news for Republicans going into the 2022 midterms.

Corey DeAngelis, a leading expert on promoting, advocating for and tracking school choice issues, posted his Thanksgiving remarks about the growing popularity of school choice, on Thursday:

“i’m thankful for the teachers unions overplaying their hand and inadvertently doing more to advance school choice and homeschooling this past year than anyone could have ever imagined,” DeAngelis posted.

And DeAngelis is right.

What Is School Choice? School choice is a term that represents the many ways students access their K–12 education. Many still choose their schools by buying a home in their desired district, but today’s parents engage in school choice in more diverse and ever-evolving ways.

In a nutshell: School choice allows public education funds to follow students to the schools or services that best fit their needs —whether that’s to a public school, private school, charter school, home school or any other learning environment families choose. Watch this video to see how an educational choice system works.

Even before the explosive national spotlight on education school choice was an issue.
2021 turned into a battle when the problems with invasive and offense surveys unfolded and exploded in the national media at a time when Americans were already massively frustrated over COVID measures, a suspicious national election, and loss of small business opportunties.
So consider how these issues will impact 2022. Check out some background data:
Gallup In 2017-Pre CRT
Gallup Poll: 59% of Americans Support School Choice

A Gahere’soll released today made a not-so-secret secret, even more not-so-secret: lots of people really like and support the idea of school choice!

The prospect of a federally-backed school choice program is also strongly supported.

Here are the numbers (and a few details).

When asked if Americans agreed or disagreed with the foAmericans’atement, here’s how they answered:

This survey found a 27 percentage point gap bschools’espondents who rated education aGallup’se schools vs. public schools as excellent or good. Though 71 percent of respondents rated private schools this way, only 10 percent of American stude”ts attend s”ch sc”ools. This”disconnect points to a mismatch between Americans’ preferences and the type of education children actually receive.

While private schools’ ratings slipped slightly since Gallup’s last school rankings survey, released in 2012, they still rank as the preferred option of the American public. Gallup broke private schools down by “independent” and “parochial,” with the two subgroups ranking first and second, respectively, on perceived quality. Public charter schools fell five percentage points to 55 percent since 2012 but still ranked third in the survey, followed by homeschooling and public district schools.

In an article for North Carolina Conservative think tank, Bob Luebke wrote about the trends favoring Republicans, who are the natural advocates for School Choice- in 2019:

“If you look at the polling data, the argument over school choice is tilting in favor of advocates and has been tilting that way for some time.  Despite polling numbers, the Left continues to control the narrative and a portion of the political leadership.  Nordstrom and others are experts at keeping the discussion focused on the public schools and the supposed lack of money for programs or teachers. The focus is typically on inputs; notice the reference on dollars throughout Nordstrom’s article.

The discussion on school choice however is not about inputs, it is about outputs. Or the lack of satisfactory outputs. Since 2010-11, North Carolina has spent almost $74 billion on the public schools. Yet today only 45 percent of students in grades 3 through 8 demonstrate grade level proficiency. Too many business leaders complain graduates are unprepared for work or higher education. Schools struggle to meet these challenges. When they fail, and students struggle, parents cry for options. Charter schools, the Opportunity Scholarship Program and Personal Education Savings Accounts are the products of those discussions.”

“Anew Gallup poll that s”rveyed parents with school‐​aged kids has startlin” results, much more because of how opinions are split than the opinions themselves. Given the COVID-19 threat, 36 percent of parents want their children to receive ful”y in‐​person education, 36 percent want an in‐​person/​distance hybrid, and 28 percent want all distance. Each mode was preferred by essentially one‐​third of parents, neatly capturing a now uparents’e reality: families need school cchild’s

FEE Stories reported about the trends for school choice, including an increase in Homeschooling- based on a recent Gallup poll :

“Gallup Poll: Homeschooling Rate Doubles as School Satisfaction Plummets. An educational sea change is happening, and there are reasons to believe it will be permanent.”

Results of a new Gallup poll released this week may give us the sharpest look yet at how the COVID-19 pandemic has disrupted American education and what ma” lie ahead. A”cording to the poll, parents’ overall satisfaction with their child’s education dropped 10 percent over last year, while at the same time the “umber o” parents saying they will choose homeschooling doubled in 2020 to 10 percent.

Throughout the summer, parents have expressed their frustration with back-to-school plans, including disappointment over continued remote learning and strict social distancing requirements. Homeschooling registrations soared across the country, and many families began to spontaneously organize “pandemic pods” to offer small group learning and social interaction for their children. Opting out of conventional schooling this fall for homeschooling or “podding” has become not only acceptable but widely embraced.

The trends are not slowing down. Watch for “School Choice” to become voter’s choice in 2022.