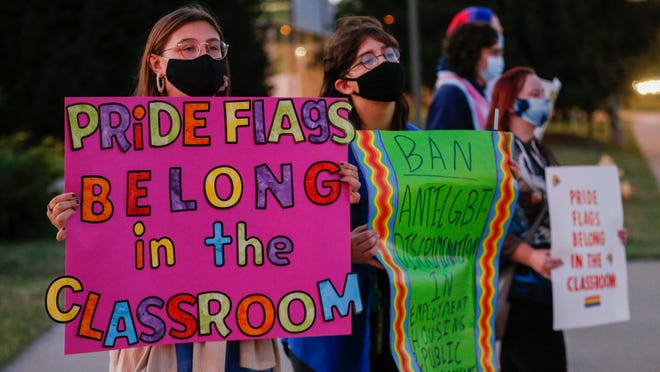 On a recent journey to opt her son out of invasive surveys, one concerned parent learned the hard way that there is no way to opt-out of the Panorama School in Wake County. Now she is about to learn that her concerns over her son being spied on may be true, according to an investigation by an independent journalist.

“On my child’s portal that is run in partnership with Panorama, my son is directed to click on links to books that teachers have suggested for extra reading.  In North Carolina Wake county, I was told that if I didn’t use the school’s assigned Chrome book, as his computer that my child would basically not be able to do the same work like the rest of class, and he isn’t comfortable with being singled out in class like that, so I really have no opt-out at all.

One of the things that gives me worry is that he has a virtual library and teachers assign books and suggest books. The suggested books are outside of the official curriculum and they are often about LGBTQ issues.  The fact that he clicked on them is being tracked I think, and that led me to wonder if the school is tracking him and other topics he clicks on.  I feel like I have no choice but to give this school access to my child like this,” one mother, whose son attends a Wake Co. Middle School, told me after weeks-long investigation with the school principal and other school staff, about how to opt-out of surveys.

In the spring of 2021, I uncovered the foundations of a teacher’s training through, New America, to push educators to take over curriculums lists in Wake County schools and use social justice to insert books on topics that were important to the teacher.

I also uncovered the PTA led by the Wake County Equity director, who was instructing members of the PTA to go around the parent’s directives on their child’s gender and help the child discover resources in the media center to help them determine their gender.

ALL IN WAKE CO. NORTH CAROLINA

Then I spent some weeks with concerned parents in the district and reported on one principal demanding access to a kindergartner’s medical records so he could “desensitize the child”,  pornography found in resources centers, confusing books about transgenderism found in elementary schools, how a Mom was banned for posting content online- from surveys, because the content was offense,  and a confusing rabbit hole to get one middle schooler opted out of invasive surveys about politics and sex.

And now, after reading a report on how activist teachers work in California, I wonder if this concerned Mom may be right and if her son’s usage on the school’s owned Chrome Book, is being tracked.

Abagail Shrier, who calls herself the “Truth Fairy” wrote recently about how activist teachers spy on children:

Incensed parents now make news almost daily, objecting to radical material taught in their children’s public schools. But little insight has been provided into the mindset and tactics of activist teachers themselves. That may now be changing, thanks to leaked audio from a meeting of California’s largest teacher’s union.

“How We Run a ‘GSA’ in Conservative Communities”

known as “Gay-Straight Alliance” clubs or “GSA”).  One workshop—”Queering in the Middle”—focused “on what practices have worked for successful middle school GSAs and children at this age developmentally.”

But what makes for a successful LGBTQ middle school club? What to do about meddlesome parents who don’t want their middle schoolers participating in such a club? What if parents ask a club leader—point blank—if their child is a member?

“Because we are not official—we have no club rosters, we keep no records,” Buena Vista Middle School teacher and LGBTQ-club leader, Lori Caldeira, states on an audio clip sent to me by a conference attendee. “In fact, sometimes we don’t really want to keep records because if parents get upset that their kids are coming? We’re like, ‘Yeah, I don’t know. Maybe they came?’ You know, we would never want a kid to get in trouble for attending if their parents are upset.”

The advice to those who run middle school LGBTQ clubs is: keep no records, so you can plead ignorance of the membership with the members’ parents. In fact, middle school teacher Kelly Baraki can be heard in the same session describing having named her club “the Equity Club,” and then, “You be You,” rather than the more ubiquitous “GSA.”

Caldeira and Baraki – both middle school teachers – led a workshop titled: “How we run a ‘GSA’ in Conservative Communities.” The audio recording of their lecture was sent to me by a conference attendee. In that address, the speakers describe the challenges for activist teachers working in the context of a politically mixed community in Central California with many conservative parents.