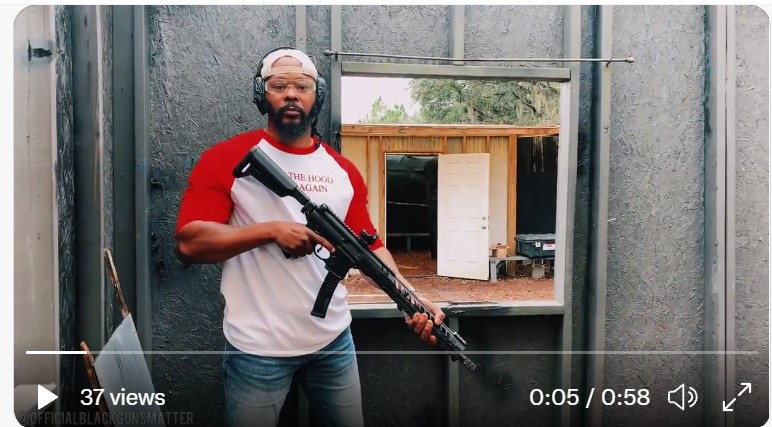 The truth is that all of the normal people get it- they understand the verdict for the Kyle Rittenhouse trial. The only people who are pretending to be outraged right now are the radical leftists. And frankly- Democrats are being racist to assume that all Black Americans are under the direction of Joe Biden.

“Don’t forget that Joe Biden told is that if we didn’t vote for him, we weren’t black. Well I didn’t vote for him, and he is losing a lot of support. Black Guns Matter too,” Maj Toure, a self-defense expert, told me when I asked him how he felt about the news today about Kyle Rittenhouse.

“Rittenhouse is a patriot,” he said. “The government is so bad, that I am starting to see my mesage about self defense ressonate with many people now, that is why I welcomed him home.”

Toure and I  talked about how the Democrats expected Black Americans to be outraged about the jury’s decision in this case- and now ridiculous that really was.

“Many of us are tired of White Liberals speaking for us about what we need to think and do. So at one point Black Americans were front line heroes during COVID, and now we are told to get the jab, and shuffle off and do and think what we are told. To be mad about this verdict. No.  I live in Urban America and we see how cringe Joe Biden is. Liberals are a bad joke,” he said.

Support EVERYONE being armed and trained.

Give what you can to keep the classes free to ALL beginners. #BGMhttps://t.co/riuZuC2Cdq

“A lot of America is caught in a bad mindset.  Democrats are racists and Republicans have bad PR in Urban areas, but we know we have the right to be liberated. Gun policies are often racist and we need to call out the arrogance of those in power.  We have to read people in to what is happening.  Rittenhose is a patriot,” he told me.

“The verdict was anticipated, Rittehnhouse was protecting the community and he tried to escape mutiple times, then he turned himself in.  He did everything right, the way he was supposed to.  The case was clearly self defense.  People have a right to self defense and to keep and bear arms, so there should be no surpise about the verdict,” Toure said.

“There are two good things in this case, one is that the jury pool sees the importnace of self defense and the second good thing is that more Americans are seeing the importance of understanding their rights and the second amendment. They are coming into acceptance,” Toure told me.

Below is footage of Toure instructing a group of new gun users.

Black Guns Matter promotes guns as a means of self-defense, an approach that faces major opposition in the United States pic.twitter.com/gQS6dVFZWq

Toure told me how he really sees the damage the Democrat party has done- and he doesn’t let the Republicans off the hook either:

“Wolves and foxes BOTH eat lamb. The wolf has more difficulty catching them because they are direct and violent. Foxes PRETEND to be nice to the lamb, but still ends up with lamb chops on his plate. Liberals PRETEND they are the friends of Black Americans, simply to devour them,” Toure said to me when we were talking about something we both know very well- the betrayal of the Democrat party.

“I am a libertarian, so there are times I depart from Republicans too,” he said.

Toure talked the importance in the Rittenhouse case, that Rittenhouse had not chased anyone, he had been chased. That is important to remember in self defense.   Toure said the next big case he is watching, that is coming up, is the Ahmaud Arbery Trial- where the victim had been chased and then killed.

Those devils that chased and murdered him should be locked UNDER the jail. #BlackGunsMatter

Toure educates and trains Urban America, he has a crowd funded campaign for lessons.

Our work at @blkgunsmattr is educating urban America on their GOD GIVEN right to bear arms as stated in the 2nd amendment of these United States of America.

Classes are for beginners, free & crowd funded. Watch the vid, RT and give what you can. #BGM https://t.co/riuZuC2Cdq pic.twitter.com/MdELBLUoAU