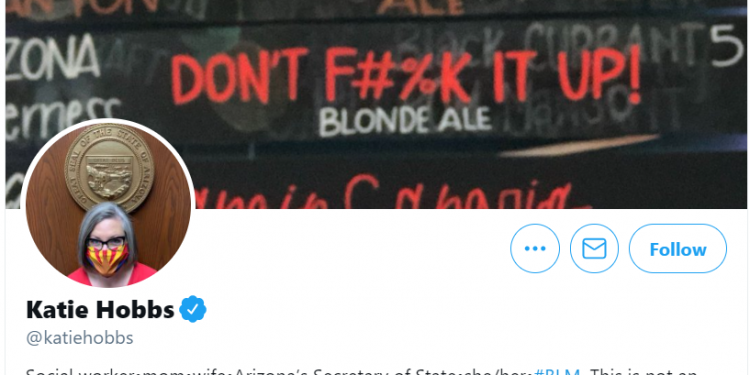 Far-left radical  BLM member Katie Hobbs, former AZ State Senator, currently, Arizona’s Democrat Secretary of  State, was instrumental in shutting out Republicans from the ballot counting process in the 2020 election.  Hobbs is running for Governor and her campaign just “hit the wall,” so she may have to remove herself from the race- because the NAACP is not having any more of Hobbs.

“We ask all persons, especially people of color, to reconsider any support for Katie Hobbs to become the next governor of Arizona,” wrote Clovis Campbell, the publisher of the Arizona Informant, the state’s only weekly black newspaper.

Key Point: Don’t campaign as a member of Black Lives Matter member- and then say a Black woman got fired for “performance issues” without expecting some massive blowback.

AZ Mirror reported on the details of the court case:

A Black Democratic state legislative staffer was awarded $2.75 million by a federal jury Wednesday, ruling unanimously that she was fired for complaining that she was paid less than her white and male colleagues in the Arizona Senate.

The verdict was Talonya Adams’ second courtroom victory over the Senate regarding her discrimination claims. Adams was fired in 2015 while serving under Katie Hobbs, who was the Senate minority leader at the time. Hobbs is now the secretary of state and is the leading Democratic contender for Governor in 2022.

The jury on Wednesday awarded Adams $2,750,000 — $2 million for the retaliatory firing and $750,000 for the discrimination against her. The news of the jury award was first reported by 12News reporter Brahm Resnik.

“Katie Hobbs just dug herself a deeper hole. She should bow out of the Governor’s race

Opinion: Katie Hobbs’ bumbling response to the Talonya Adams verdict has turned what could have been a one-day story into a full-blown catastrophe in her campaign for Governor. She should get out,” Laurie Roberts wrote.

The political messaging is disastrous- giving the Democrat’s opponents the perfect opportunity to call Democrats racists- which won’t play well- so expect Hobbs to start to show a loss of support.

Andrew Jackson posted precisely that- that Democrats are racists for support Hobbs.

ABC News reported on the spectacle:

“A recent OH Predictive Insights poll showed Secretary of State Katie Hobbs with a decisive lead in Arizona’s Democratic Primary race for Governor. Hobbs had 42% of the vote and her closest rival, Marco Lopez, has 8% of the vote. But Hobbs’ good fortune began to change earlier this month after a federal jury awarded Taloyna Adams, a Democratic policy advisor for the state senate, $2.75 million. It was the second time a federal jury agreed Adams was the victim of racial and gender discrimination,” Mark Phillips wrote.

The jury also found she was retaliated against because she questioned why she was earning less than others who did the same work.

Hobbs, who was the Senate Minority Leader at the time, testified in court saying Adams was fired for performance-related issues.

“With the verdicts finding her culpable for race and sex discrimination and retaliatory termination, for her to say these other things is dishonest,” Adams said.

Further reading on Hobbs and her association with Black Lives Matter: