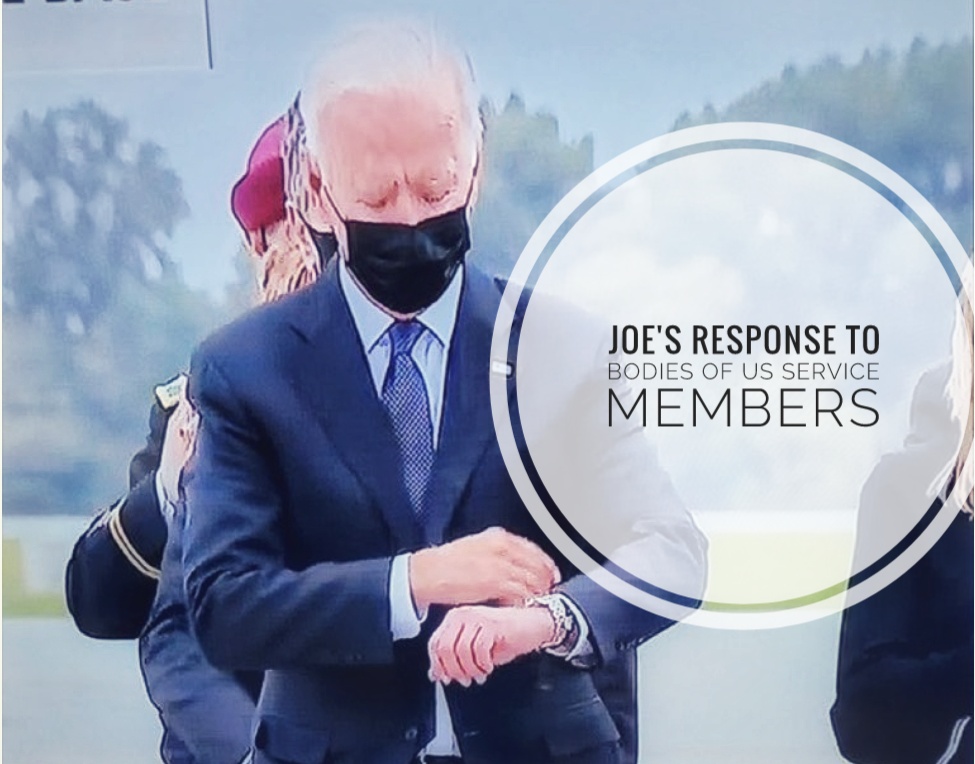 If anyone else other than the Mainstream media’s little sweetheart, Democrat Joe Biden, had been captured looking at his watch during a review of the caskets filled with the bodies of American servicemen and women, after a completely faulty military screw up, they would be hounded by the media until the end of time.

In the United States Armed Forces, a dignified transfer is a procedure honoring the return of the remains of a service member from the theater of operations where they have died in the service of the United States.

Key Point: The Mainstream media writes with enthusiasm where Biden had his eyes during a highly important ceremonial event (see CNN article below)- and they ignore how closely our veterans and service members watch for traditional respect to their service.

Biden had denied the press access to the event, which usually is the kind of event to bring national attention.  It was also reported that Biden did not have the ceremony listed on his schedule.

Captain Maureen Bannon, an Army Veteran who served in Operation New Dawn, reacted immediately on social media and demanded that Biden resign, pointing out the Commander In Chief’s very public incompetence over the last weeks especially.

She was incensed by Biden’s behavior at a ceremonial transfer of remains on Sunday morning when he casually looked at his watch, signaling his lack of concern for the ceremony.

.@JoeBiden, your blatant incompetence killed these American Heroes and you felt it necessary to check your watch during the dignified transfers of their remains.

This just shows how completely classless you truly are.

In a proceedure that is meant to be a transfer of the remains of the men and women who are killed in combat and meant to offer some small amount of closure to the family and loved ones of those who were struck down while in duty, Biden makes a horror show of himself and everyone who supports his behavior.

A transfer of rights  is meant to be dignified, respectful, and communicate sincere and authentic consideration to the loved ones of those who died. It is a small but very meaningful gesture from a thankful nation by the people we have elected to represent us. It is a small gesture, but a very important gesture for our nation to get right.

We are a hurting nation- together -over Biden’s carlessness.

To the men and women who have served and all of their families- please know that 'We The People' are as hurt and dismayed over the left- and at their lack of reverence and their disrespect to your service- and to our traditions as you are.

We are a hurting nation- together. https://t.co/7kDnSiXB78

CNN ran a fluffy propaganda piece to protect Biden from the brunt of anger he would receive if they showed the truth.

Notice how CNN catches every detail about where Biden had his eyes, in their obvious PR attempts to make him appear a hero- yet they missed the what would be intensely painful for the families of those fallen and the service members who are left wondering what value their service holds to the nation.

The President’s attendance at what the military calls a “dignified transfer” is among the gravest responsibilities for any American commander in chief, a searing reminder of the consequences of his decisions and the weight of the job. In withdrawing all US troops from Afghanistan, Biden hopes to be the last US president to witness war dead returned home from that country.

The 13 troops were killed in a terrorist attack outside the Kabul airport gates last week as they assisted a massive airlift effort, a deadly coda in the final days of America’s longest war.

One-by-one on Sunday, the cases were carried with practiced, solemn precision by teams of seven from the bay of a C-17 Globemaster cargo plane and onto waiting gray mortuary vans.

The transfers occurred in near-silence; the hum of the plane’s auxiliary power pierced only by occasional cries from family members watching nearby and an officer’s calls to “present arms” when cases emerged. The plane had carried the remains from Kabul to Kuwait to Ramstein Air Base in Germany before its final flight leg to Dover, where it landed Sunday at 8 a.m. ET.

Biden looked on from several yards away, the first lady on his left, lifting his hand to his heart each time the process repeated itself. He watched intently, locking eyes with the procession as it moved past. Before the transfers began, Biden walked up the ramp into the hulking interior of the plane, where the cases were arranged in neat rows, for a moment of pray.

For more reading on Biden’s disrespect of those fallen this week: