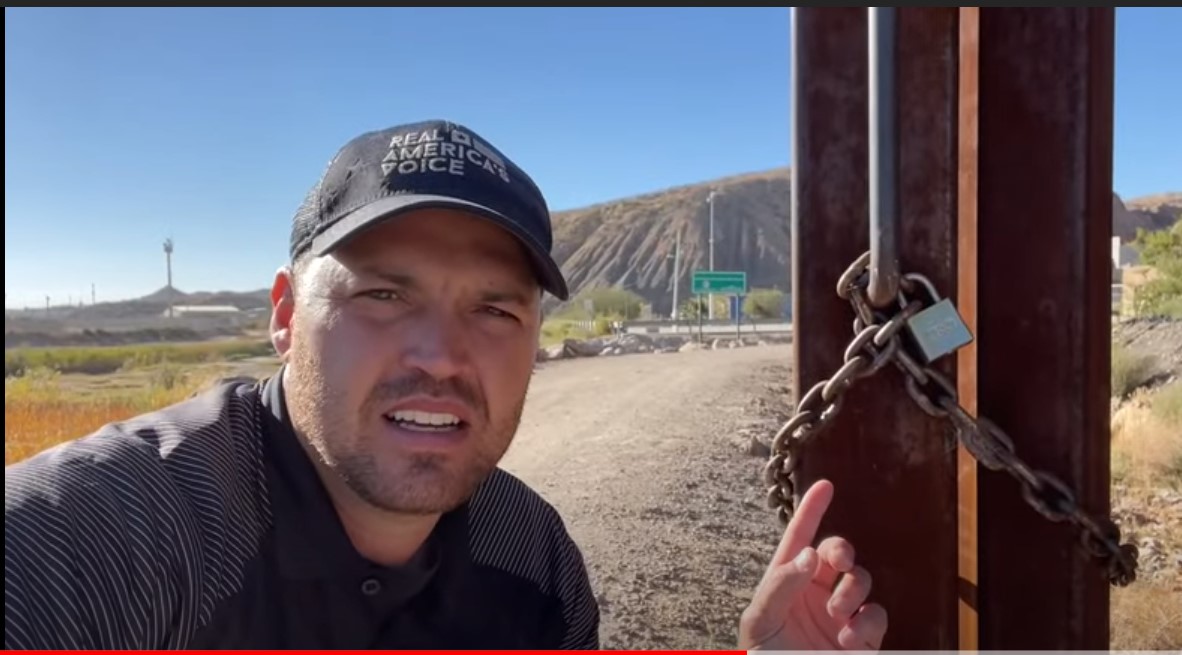 Ben Bergquam, the top investigative reporter for Real Americas Voice and the founder of Frontline America, recently reported from the Southern Border wall to show Americans how subversive the Democrat Party behaves in the face of our greatest dangers.

Key Point: The IBWC, A Democrat-dominated Citizen-led, federally funded- agency, has the power to breach a Republican endorsed and funded citizen-built security wall. Democrats want the wall opened because they claim to be concerned about water quality and flooding– and Republicans want the gate closed because they are concerned about illegal invasions, burdens to the tax base, Americans’ lives, and national sovereignty. Not all citizen’s concerns are equal.

NO EQUAL JUSTICE FOR AMERICANS

This week, Bergquam visited a three-mile border wall in the Rio Grande section of Texas that was crowdfunded by a private group called “We Build The Wall”, and then built by a private company owned by Tommy Fisher.

Bergquam visited the area and found a breach in the wall that was intentionally left wide open, directed by a citizen’s group- enforced by a Biden chosen bureaucrat.

“This is the wall that the American citizens built. The IBWC sued and forced the gate open. They lock the gates open. This is Joe Biden and the Democrats. They are the enemies within,” Bergquam said.

IT’S BECAUSE OF THE ENVIRONMENT! THEY NEED IT OPEN FOR GREEN POLICIES

“The Rio Grande Citizens Forum is a quarterly public meeting the federal agency hosts to discuss the Rio Grande between Percha Dam in New Mexico and Fort Quitman, Texas. The IBWC is a binational agency that oversees water treaties, flood control and water quality between the United States and Mexico.

IBWC Commissioner Maria-Elena Giner, who President Joe Biden appointed to head the U.S. portion of the binational agency in September, will give the opening remarks.”

According to Giner’s bio she knows how to padlock a gate open:

“Maria-Elena Giner was born in Los Angeles, but spent her childhood in Juárez. She says her upbringing on the border inspired her to study civil engineering and pursue a career in public service.

The challenges she faced as a child influenced her dedication to helping solve problems along the U.S.-Mexico border.

Giner was sworn in as the U.S. commissioner of the International Boundary and Water Commission on Sept. 15, after being appointed by President Joe Biden. Giner is the second woman and the first Latina commissioner.

She studied civil engineering and later received a Master of Business Administration at the University of Texas at El Paso.”

WONDER IF SHE HAS ANY CARTEL CONNECTIONS? I DIGRESS

Understanding who is forcing the gate open- consider the following video:

Bergquam showed the evidence that while the Republican administration and supporters of Donald J. Trump were trying to protect the United States, that Democrats and left-leaning Non-Government organizations were encouraging an illegal invasion- and forcing safety measures to be disabled.

Bergquam previously reported on the lack of concerns the greenie left have for water and the environment: