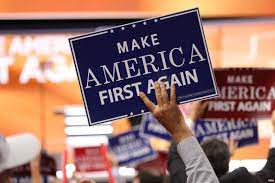 “America First” Conservatives and Populists have had it with the “Grand Old Party’ Leadership going to the left and trying to be more appealing to leftists, leaving hundreds of millions of Americans without a political voice to represent them.  The newest leftist push is for a “new “Republican Party that resembles the farthest left of the Democrat Party.

Just this week, the GOP announced they had a new LGBTQ focus,  and it is usurpation.

Todd Starnes recently reported about the Party’s LGBTQ betrayal by covering a recent interview with Tony Perkins. In that interview, Perkins called for the top leadership of the RNC,  Chairwoman Ronna McDaniel, to resign in disgrace for being a pro- LGBTQ leftist.

“I think it’s time for her to take up something else and leave the party to those who I think can chart a path forward, restore what has been lost, and make sure that the Republicans, the conservatives regain the majority – both in Congress and continue to see victories in states across the nation,” Perkins said.

“I think she needs to step down,” Perkins said. “She has outlived her purpose at the RNC.”

The RNC is “embracing this agenda that is hostile to a large portion of their constituency,” Perkins said, adding that McDaniel is moving in a direction “incompatible” with religious liberty.

Ben Bergquam, the founder of Frontline America, called out the “sinful left’ in reaction to the Starnes article.

“The way to win is not to get more like the Democrats, it’s to go the other direction! Stop succumbing to the sinful left! Stand for morality again or lose forever! Never use California as your model!” Bergquam wrote.

The way to win is not to get more like the Democrats, it’s to go the other direction! Stop succumbing to the sinful left! Stand for morality again or lose forever! Never use California as your model! https://t.co/EpF7jpl6LZ

Bergquam joins other voices who have demanded the GOP work harder to represent non- Democrats.

This isn’t a new concept- the Tea Party movement happened out of frustration over Barack Obama and Nancy Pelosi’s ‘Obamacare’ corruption- but also because of ‘Republicans In Name Only’- like Mitch McConnell’s appeasement of the left’s corruption.

RINOS, at the time, chased Conservatives out of the Party then, and the Tea Party rose to get more America First politicians into position in DC.

Since the Tea Party, people like Dan Schultz and Steve Bannon have helped with a different kind of Tea Party.

WHAT CAN WE DO?

Now the focus of the MAGA, Populist, America First, Conservates is on getting in to the Party, running for office – esp as Committeemen and Neighborhood team leaders, (who get to vote on leadership)- and forcing the Party to align with the right.

REMEMBER WHAT DAN SCHULTZ AND STEVE BANNON SHOWED US

Recently, Dan Schultz of the Precinct Committee Project, posted about the recent news that Bannon is facing a looming arrest-that is pure political persecution- basically for his political organizing to return the Republican Party to Republicans.

Bannon has been a powerful and outspoken critic of when the GOP goes to the left, and now Bannon is paying a very high price.

As Schultz wrote on Friday in his reaction to the news about Bannon- the left and the GOP are brazen about their alignment at this point. Schultz’s advice: The best thing Americans can do is get into the Party and make it change. Do it in honor of Bannon.

If you don’t like the leftist moves of the GOP, consider how you and your associates, friends, family, and anyone else can overwhelm the GOP’s debauchery- by joining the Party and making them change- from the inside.

This election cycle is for “all the America First marbles”. This is the time, and you are the person to make the changes we need.